Wal-Mart Getting iPad Too 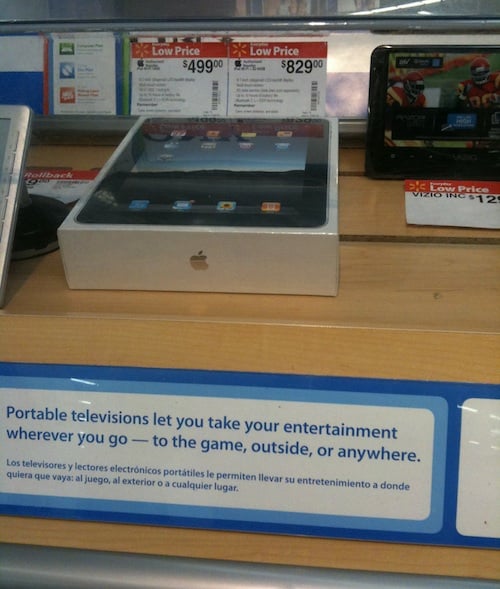 First Target, now Wal-Mart. Reports have it that the iPad is coming to Wally World, and soon, too. Here’s the scoop from Apple Insider:

In a potential answer to that speculation, we’ve received word that Wal-Mart sent an email to its store managers today outlining the iPad models and related accessories that should be making their way to store shelves in the near future. According to this partial photo of the alleged email sent to us, Wal-Mart plans to offer all six models of the iPad, with initial stock of just five units per model for this location. In addition, a number of standard accessories, as well as AppleCare, will be also be offered.

Wal-Mart currently offers over 2,800 “Supercenter” stores around the U.S. along with an additional 750 somewhat-smaller discount stores, presenting a significant opportunity for Apple to expand the iPad’s distribution network should the device be carried in all of the chain’s stores.

True, this is a big opportunity for Apple products to spread their wings, as it were, but I hate Wal-Mart. Not only do I feel like I’m supporting the wrong cause, but the quality always sucks. This obviously won’t be the case with Apple – the iPods do nicely there, I imagine – but it’s still trashy.