“Transparent iPhone” Will Help You Avoid Accidents When Texting While...

by Noemi 9 years ago9 months ago

You can’t fix stubborn. Or stupid. But we certainly can’t blame anyone who tries. Perseverance and persistence are virtues after all. Then again, there’s perseverance, and there’s creating solutions to what shouldn’t be problems in the first place! 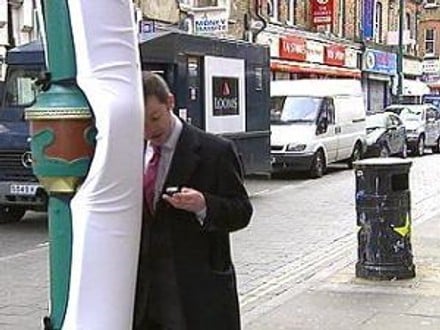 Anyhow, someone has unearthed a patent filed by Apple that would create a “transparent iPhone”; transparent in that it will allow the user to see what’s in front of him (or his phone) so that he can avoid hurting himself and others. With 500 million iPhones out there, this is scary!

In other words, when everyone who has common sense knows that texting while walking is NOT a good idea, the patent is going to make it easier – and supposedly safer – for those who just can’t get their eyes and hands off their iPhones.

Welcome the transparent iPhone. So you can text, surf the web, or do whatever can’t wait to be done while you’re walking.

Truth is, there might be something to the idea that I might be missing, but seriously, can’t we take the time NOT to be on our phones when we’re out? Also, what if the angle you’re holding your phone at is not the right one – that is, it doesn’t let you see what’s ahead of you except for the pavement?

I think we should just file this under USELESS.

You know what’s going to be hilarious if this ever comes to be? A selfie of some idiot walking smack right into a pole.