by Lorraine Barte Nepomuceno 13 years ago10 months ago
3 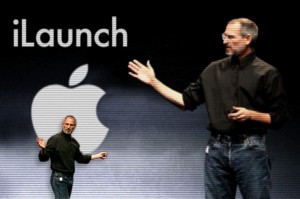 The book, which is in the early planning stages, would cover the entire life of Mr. Jobs, from his youth in the area now known as Silicon Valley through his years at Apple. (source)

This is exciting news, because apart from Noah Wyle’s portrayal in The Pirates of Silicon Valley (still one of my favorite guilty-pleasure films, btw), there’s not much I know about Steve himself.

While waiting for the book to hit the iBookstore, you might want to check out these previously written books on Steve- all unauthorized, and some of which apparently have pissed off Steve enough to demand they be pulled from bookstore shelves:

Apple Confidential 2.0: The Definitive History of the World’s Most Colorful Company

This one focuses more on Apple the Company rather than Steve the Man, but if you’re at all interested in the early history of Apple, it’s a good read.

iCon: The Greatest Second Act in the History of Business

This is one of the aforementioned books that angered Steve, and the truth is that it’s probably my least favorite of the bunch, what with its tabloid-style writing and obvious attempts at sensationalizing Steve’s “unethical” past choices.

The Second Coming of Steve Jobs

Perhaps the best unauthorized biography I’ve read on Steve, this is based on “interviews with nearly 100 of his associates and friends” made by Vanity Fair editor Alan Deutschman. Well-written and easy to read, with some interesting perspectives on Steve. A little dated, but still a fascinating read.

Have you read any books on Steve?