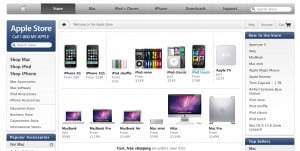 Buying new Macs. Now I know my geekiness is shining through again, but the truth is that few other phrases can fill me with such excitement. Sometimes, the mere anticipation of getting a new Mac is almost more exciting than actually buying one.

It’s like this: because my husband and I are such firm believers in equality, we always buy two of the same thing. The same mobile phones, the same widescreen monitors, and- several years ago- the same iMac G5s. The problem is that this pair of iMacs has decided to finally give up on us. At the same time.

We can replace their logic boards, but for $1k to replace both, we’ve decided to just pack them away for now and get new ones instead.

The question now is: with what?

Two entry-level Mac Minis will set us back just $1198. Two entry-level iMacs will cost us $2398, but 21.5-inch screens are too small for the work we do, so we’d have to go with the lower-end 27-inch models, which will cost us $3398. Then again, we already have two gorgeous 24-inch Samsung monitors, so the Mac Minis might be a better choice for us.

I’ve heard so many negative things about Mac Minis- how they’re only good as “second Macs” or as media centers for fancy living rooms. How good are they as workstations? Will they run Photoshop well? The occasional Final Cut Express project? I’d love to hear from other Mac Mini owners.