Greenpeace and the Ivory Igloo of Destiny 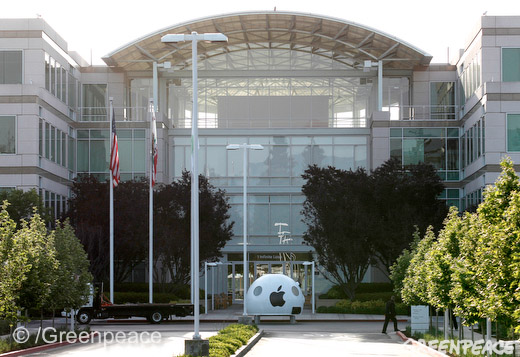 Earlier this week, Greenpeace staged a protest outside Apple HQ in Cupertino, CA, which involved iPhone costumes, giant Tweets projected onto the building’s glass facade, and some kind of weird life pod thing in the shape of a big white ball with the Apple logo on the side. Their activities involved the iPhone-shaped people harassing Apple employees on their way into work, and a pair of what had to be very small women who sealed themselves inside the big metal ball and refused to unlock it and come out — not even for the police, who had to break out the power tools and cut them out of the thing. 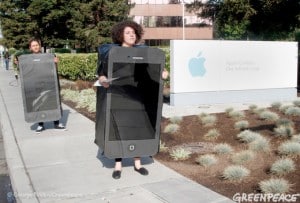 Greenpeace claims that they staged this thing to protest Apple’s dependence on coal-based energy to power iCloud. I could write a whole different article on why Greenpeace set their sights on the wrong company. (“Let’s go after Apple, ’cause you know, they’re the biggest company in like, ever, and stuff.”) I suspect they picked Apple purely because it’s such a high-profile company — not because Apple’s energy sources are any less green than other prominent companies. But I digress.

On what planet is the idea of planting an 8′ tall, 10′ wide metal orb at Apple’s front door an intelligent means of protesting coal-based power? How was anyone supposed to know that Greenpeace was staging a green energy protest based on that? Did they really think this would be effective? Can you imagine the time, money, and effort that went into planning and executing this elaborate stunt? Did the Greenpeace people have a brainstorming session that ended with, “Hey guys, I got it. This’ll teach Apple good. We build a big, white ‘pod’ sphere, climb inside it, and refuse to come out until they promise to change to greener energy sources! And just for good measure, let’s make up some giant iPhone costumes. It’ll be a hoot!” Or maybe some Greenpeace Guru climbed out of his cave and declared that Mother Earth told him what they must do. 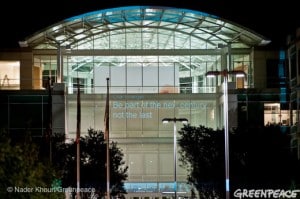 Perhaps more to the point: “I know! Let’s annoy the crap out of Apple! That’ll get ’em to use green energy!” Let’s not forget, this is the same organization that just a few weeks ago released big bundles of black balloons inside a number of Apple retail stores. Because nothing says “Okay, I get it. We need to switch to greener energy sources!” like having to climb up on a big ol’ ladder and pop a hundred balloons. I just don’t get how any of this could have ever been deemed a smart, effective way of getting their point across. If a big white ball showed up on my doorstep, I’d grab some popcorn and a lawn chair and wait for Lady Gaga to pop out.

Yes, I’m piling on the sarcasm in bucket loads here. Even so, I stand a much better chance of getting my point across than Greenpeace did.

To be clear, I have no problem with Greenpeace’s goals of living in a greener world. Renewable energy is an important issue, and I’m not making light of it. Likewise, I admire anyone with convictions strong enough to act on them. It’s Greenpeace’s tactics I take issue with, which in this case were certifiably bonkers. (I’m surprised they didn’t go all out and hire these weirdos to provide musical accompaniment.)

Of course, for their part, Greenpeace is already declaring victory, since Apple today made an announcement about all of their data centers going to 100% renewable energy sources by the end of this year. Right. Because there’s no way Apple ever thought of doing that until Greenpeace showed up with Paul Bunyan’s ping-pong ball.

Hey Greenpeace, how about saving the money you spent on costumes, projectors, and that goofy people-pod — not to mention bailing out those jailbirds who resisted arrest — and hire a strategist or PR person that knows how to effectively communicate your message to the masses?

I know a company that excels at getting its message out to consumers. Maybe you ought to look them up. 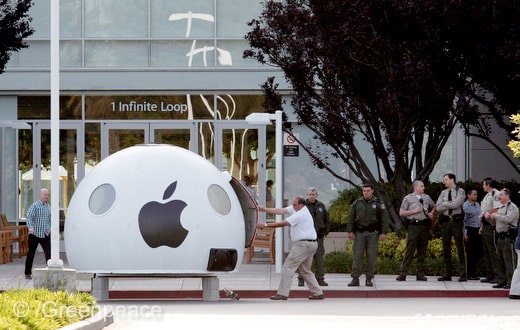