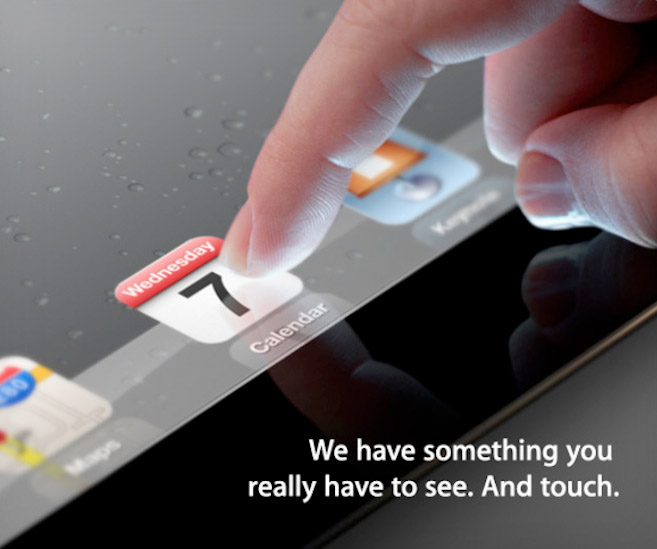 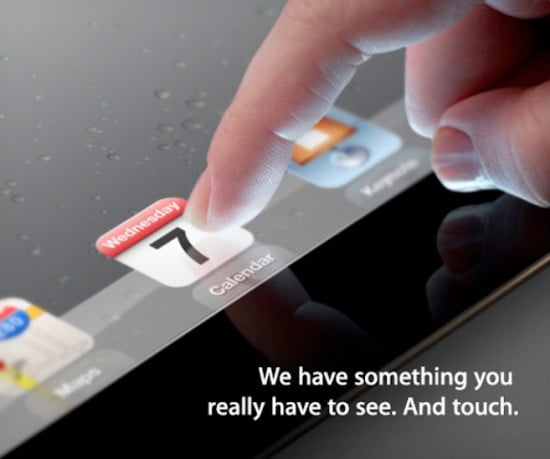 Coming as a surprise to absolutely no one, Apple has sent out its formal invitations to members of the press for a keynote event on March 7th, and the agenda is unquestionably iPad 3.

Next Wednesday, March 7th, the press will gather before Apple’s favorite keynote stage — the Yerba Buena Center for the Arts in San Francisco — at 10:00 a.m. PST, for the official unveiling of the iPad 3.

Will that be the new iPad’s name? Will the device have a retina display? A quad-core A6 processor? How about Siri? Will Microsoft appear to tout Office for iPad? Will Apple hike up the price by $80, as some news sources are suggesting? How soon will it be available? Might there be more than one model available, such as the long-discussed “iPad Mini”? Will the next Apple TV announcement piggyback onto this event?

What other surprises might Apple have in store? These questions and more will be revealed!

The invitation came with the image attached above, which in all likelihood is your first real glimpse at the new iPad and its HD screen. An immediate question that comes to mind: Where’s the home button? Is Apple ditching it, or is it hiding under that thumb?

Also worth noting: Apple sent out its iPad event invitation at the exact moment that Google’s Eric Schmidt took the stage at Mobile World Conference to talk about Android. Trying to steal Google’s thunder much? You better believe it.