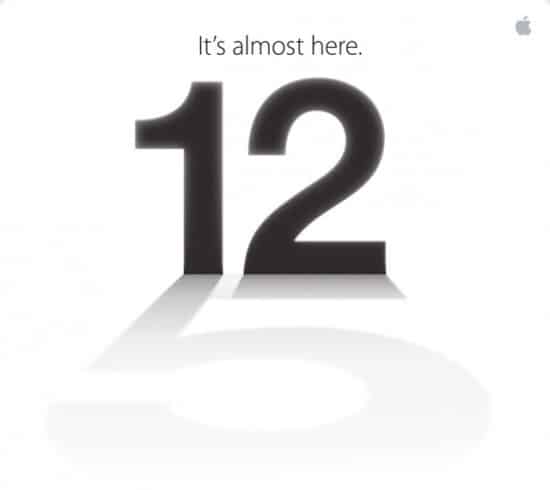 Confirming months of speculation and rumors all over the web, Apple today sent out the official invite for its next big media event, to be held on September 12th. It’s iPhone time.

Mark your calendar for September 12th at 10:00 A.M. Pacific. That’s when Tim Cook and his team from Apple will take the stage at the Yerba Buena Center for the Arts in San Francisco, to announce… something. Probably the next-generation iPhone, but then, Apple ain’t saying. They never do.

Apple loves to tease us. They live for it. The “less is more” approach is their masterstroke of PR, because it gets everybody excited over a new mystery. Apple uses this tactic every time they send out media invitations to one of their keynote-style press events. The invitations always come in the form of a carefully-made image that contains a date and some kind of hint regarding what the event is about.

In this case, the hint comes from the shadow cast by that giant number 12. The “5” in the shadow, in all likelihood, confirms the longstanding consensus that the next iteration of the iPhone would be called “iPhone 5.” This comes despite arguments that the iPhone’s fifth version was the 4S, just as the second version was the 3G, so naming it “iPhone 6” would be the most logical choice. But no matter. The iPhone 5 will be formally announced on September 12th. Even the “It’s almost here” tagline backs this up; it’s Apple’s way of winking at the bloggers who love to spread rumors about Apple’s next products.

Will it look anything like the endless part leaks and mockups that have circulated the blogosphere? (Yeah-huh.) Will it have any major surprises? (Doubtful.) Will Apple nevertheless somehow convince us that the iPhone 5 is the coolest, most lust-worthy device ever made? (Oh, yeah.) Expect Mr. Cook to trot out several of his VPs to discuss the most important features of the new iPhone, along with new announcements about iOS 6, and how the latest version of iOS is tailor-made for iPhone 5. And that you can use iOS 6 on other devices going back a few generations (probably no further than iPhone 4 and iPad 2), but you won’t get the full experience unless you own the new iPhone. There might even be a third-party developer or two invited on stage to demo their latest and greatest app on iPhone 5 (that’s your cue, Chair Entertainment).

And then there’s the question of what else might show up for this event. Will the event be only about the iPhone 5? Might Apple also throw in a “One More Thing” for that oft-rumored iPad Mini? Or will that be announced at a separate event in October, as many pundits believe? Will Apple finally bring out a new iPod Touch? What about iTV?

On that topic… Apple has been very predictable with their announcements and presentations since Tim Cook took over as CEO. There have been no major surprises from the company in at least a year now, with most events being about refreshes of existing hardware or software that maintain a calm, consistent, “business as usual” demeanor. (Rather like Mr. Cook himself, one might say.) Are the days of Jobs-ian showmanship and out-of-nowhere surprises over for Apple?

I’m starting to think so.