Touting the rise of the “post-PC world,” Apple today defied all expectations by unveiling not iPad 3 or iPad HD, but simply, “the new iPad.”

The big news out of San Francisco today was the unveiling of the brand new, third-generation iPad, which Apple called “the poster child of the post-PC world.” As expected, the new device has a 2048 x 1536 pixel Retina Display, with 3.1 million pixels on its screen — that’s more than 264 per inch — and 44% better color saturation than iPad 2. It runs on the much-speculated A5X processor, giving it a dual-core CPU and a quad-core GPU. And no, that physical home button hasn’t gone anywhere.

(By the way, even though Apple is calling it simply “the new iPad,” instead of iPad 3, I predict most of the tech-focused media will take to calling it iPad 3 as a shorthand, anyway.)

Consumers who need high-speed access without wifi will be excited to hear that the new iPad will be available in a 4G LTE model, which transfers data at speeds up to 73 megabytes per second. Both AT&T and Verizon will be getting their own distinct models of LTE iPads. Roaming 3G will be supported all over the world, since 4G is primarily available only in the U.S. You can also use your new iPad as a personal wifi hotspot, if your carrier supports it. Apple boasted that these elements comprised “the most wireless bands of any mobile product, ever.”

A new camera is being incorporated into the new iPad as well, a 5 megapixel camera with similar technology to what’s in the iPhone 4S (though the iPhone’s is 8 megapixels). In addition to higher-quality images, it will also record video at full 1080p — just like the 4S. 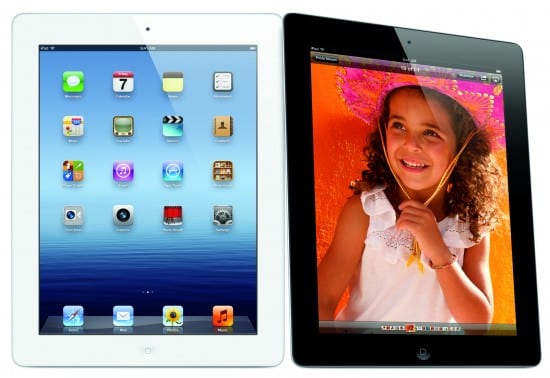 Siri is not being added to iPad, as many pundits speculated (including yours truly), but as a consolation prize, the new iPad does have Voice Dictation. It appears the same way as it does on the iPhone 4S, with a small microphone button on every keyboard. Voice Dictation will work for U.S. English, British, Australian, French, German, and Japanese.

Keeping pace with the iPad 2, the new iPad sports a 10-hour battery that will (astonishingly) run for 9 hours on the notoriously power-hungry 4G LTE networks. It’s about .8 millimeters thicker than the iPad 2, and .07 pounds heavier. Prices remain the same as the iPad 2, and pre-orders start today for shipping (and presumably in-Apple Stores) on March 16th.

Apple also talked about how apps run better on the new iPad, and reported that they’ve upgraded all of their proprietary apps to take advantage of the new screen and higher horsepower. In addition to updating Garage Band and iMovie with loads of new features (the coolest: Garage Band now lets you link up to 4 iOS devices for a “Jam Session”), they’re also bringing iPhoto to iOS (finally!). iPhoto particularly wowed the audience at the Yerba Buena Center, with an entirely new, touch-friendly UI, gesture-based navigation and editing, and some wildly cool new features like auto-straightening a picture’s horizon, specific spot manipulation, filters, and Journals — pages you can create to display groups of photos. (Watching these various new functions in action, methinks someone’s been paying a lot of attention to Snapseed and Instagram…) The new iPhoto for iOS (works on both iPhone and iPad) is available today from the App Store for $4.99.

Epic Games and Namco were also on hand to demonstrate impressive new games — Infinity Blade: Dungeons from the former, and a flight sim called Sky Gamblers from the latter — with both repeatedly stating that their graphics and presentation are “console quality.” That was a phrase repeated more than once, and Epic also noted that their demo showed off “more memory or screen resolution than either the Xbox 360 or PS3.” Is Apple going after the major consoles now? Will big game-makers port hot console titles over to iOS? Mmm, the possibilities are mind-blowing.

There was also a demo of a new app from Autodesk called Sketchbook Ink, which runs on a whole new graphics engine for mimicking the qualities of ink. It was a truly impressive demonstration, and the app will be available sometime in April.

Also as predicted: the iPad 2 isn’t going anywhere. Apple is merely lowering its prices across-the-board by $100. They predicted that this would make the iPad 2 a good option for educators and schools.

Apple introduced some new iOS features and the expected Apple TV refresh, and I’ll post about those in a separate report later today. 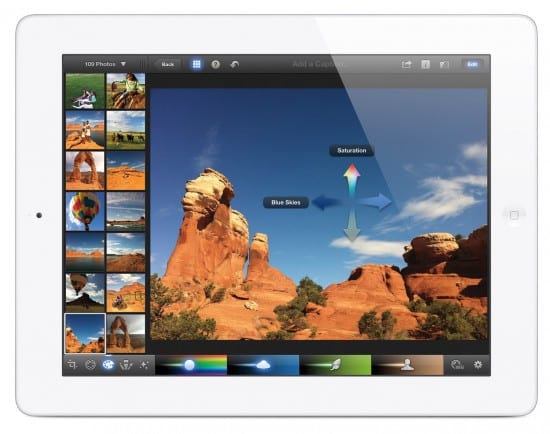