A Post-Macworld look at Apple in 2008 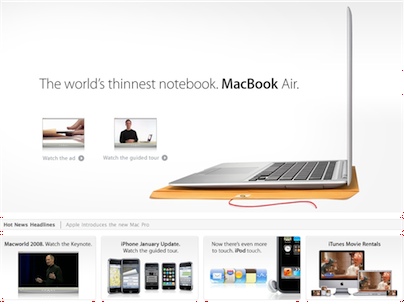 Macworld is behind us now, and even though some consider the keynote announcements to be less than spectacular, I have to say that I’m more excited about Apple in 2008, than I was in 2007 at this time.

Well, let’s take a look at what we had to look forward to from Apple in 2007 after Macworld. We had the iPhone and the AppleTV. That was pretty much it. No new products were released at Macworld 2007, and with the exception of the March release of the AppleTV, we basically talked about the iPhone from the day of the 2007 Keynote until the day Leopard was released.

We had very little MAC stuff to talk about in 2007 from Apple. The primary focus was on releasing the iPhone and getting it in shape. Leopard was delayed, there were no new Macs to discuss – and that can get particularly boring for our International readers, some of whom STILL don’t have legal access to iPhones.

This year, however, we saw a major software update to the iPhone (and a promise of an SDK in Feb. 08), new iTunes rentals, a completely revamped AppleTV, and a brand-new Mac – the Macbook Air.

While I don’t really think the Macbook Air is going to be groundbreaking sales-wise, I do think the ultra-slim design of the device will have an influence over the notebook market, and will lead to better, slimmer, Macbooks and Macbook Pros down the road. If the Macbook Air does well, we could see some very interesting third party products for the device in the near future, and I look forward to see just where the Air takes us.

It will be interesting to see how the AppleTV takes off on its second attempt. The new features seem to be adding some much needed appeal to consumers, and I’m glad to see that Apple didn’t leave early AppleTV adopters out in the cold. If there is ever going to be a time for the AppleTV to take off – I think 2008 might be it.

Obviously the software side of the iPhone is just beginning this year, with the 1.1.3 updating adding some great new features – and the upcoming SDK is going to open up even more new avenues for the iPhone that should prove to be very, very interesting.

Last year, after all the excitement of Macworld had simmered down a bit, we were left waiting for an amazing device to debut – and we waited – and waited – and waited some more. It made for a really speculation filled, and slightly boring first 2 quarters of 2007 on the old Apple news front.

2008 looks to be a lot different, and I can’t wait to see what else is in store.