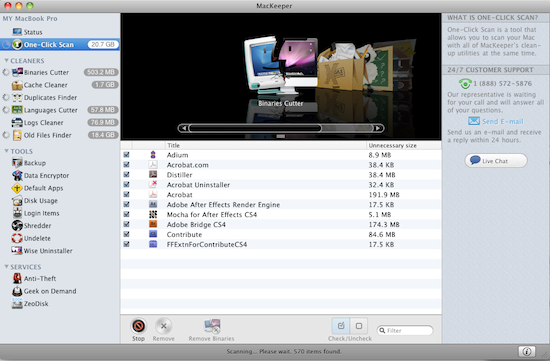 UPDATE: In response to the overwhelming number of negative comments on this review (at the bottom of this page), the company that created MacKeeper has fired back with a response, claiming that they have been the victim of an unethical competitor who’s trying to tarnish their reputation via “paid blog posts, advertisements, and an army of comment and forum spammers to make false claims and scare our potential customers.” Read all about it here.

When I was spending my days in the Windows world, I had lots of different utilities to fix broken things. There was Norton Utilities to scan for viruses, I had a defragger handy too, and all sorts of other goodies that consumed my time. Since I moved over to the Mac, I noticed that I didn’t have the same range of options for utilities. Sure, most of them were there, but they were in individual programs, not one big app. Problem was, you still need some of those utilities. Recently, MacKeeper came onboard as an advertiser here at Apple Gazette, and I was sent a free license to check out. Since I’m the guy with the brutally honest opinions here at AG, I was tasked with reviewing it. So, here it is in all it’s unabashed glory.

Why Do I Need It?

Well, that’s a good question. Most people spend their whole Mac lives working without any kind of fancy utility. But over time, things get cluttered inside your hard drive. Sure, you can delete that app by dragging it into the trash bin, but there are always little remnants floating around the library and other spots on the hard drive taking up space and slowing things down. Then there are options added by the apps themselves which aren’t needed on every computer. Taking out some of those things helps make the OS zippy again after years of functioning under the heavy load.

How Does It Work?

Fire up MacKeeper and it starts with a scan of the hard drive. This gives you an overall view of everything you can delete from there and free up space. Here’s what my first scan looked like: 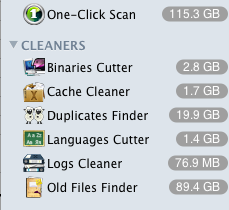 My scan showed that I had 115.3GB of data that I could get rid of. Freeing up that much hard drive space seems impossible, right? Here’s how MacKeeper does it:

Binaries Cutter – Lots of programs are a universal binary, meaning that they can run on both Intel and non-Intel machines. You’ll only ever need one binary per machine, so why keep the other one floating around?

Cache Cleaner – Sometimes the OS moves files around to make it faster to access. Thing is, they get cluttered over time and can slow down the system. This frees up the space.

Duplicates Finder – This is pretty self explanatory. If it’s a dupe, it can be removed.

Languages Cutter – Unless your name is Franky, chances are you don’t speak 14 languages including a rare Klingon dialect. This removes the other languages from your OS and apps, freeing up space.

Logs Cleaner – Apps can put log files on the computer to help move things along. As is to be expected, it’s not necessary to have all of them forever, so this helps to clean them out.

Old Files Cleaner – Haven’t used something for a while? Get rid of them.

What Else Does It Do?

How about removing old programs? App Zapper is so popular because it removes all of the components of the programs installed on your Mac. MacKeeper has that same function in their program, making removing old programs a dream. There’s also a data encryptor, a shredder to really get rid of old files, and an undelete just in case you screwed up and trashed that important file. Then there’s also an anti-theft system, Geek on Demand and ZeoDisk for online storage. It’s got a ton of stuff in here, that’s for sure.

I did have a few things come up that seemed a bit weird. One file – Dodgeball the Movie – came up as an old file that I hadn’t used in 3 months. I only bought it last month, so I’m not sure why that was that way. But on the flip side, it found an old movie I had been looking for as well, lost deep in the recesses of my computer. Point is, make sure you double check before you randomly delete files. And if you do delete one or 12, use undelete through MacKeeper or Time Machine to get it back.

A lot of times, programs such as this are pretty pricey. MacKeeper is only $39.95, and you can get an additional 30% off if you follow some of the tips on their purchasing page. That said, it’s a subscription based system, so you’re going to pay that money every year to keep things up to date. Is it worth the price? I think so, particularly if you use your Mac for your primary computer. If you use it for occasional web browsing, this might not be quite as important a purchase. But frankly, App Zapper is $12.95, and MacKeeper has that and over $25 of additional value, so it makes sense. I’d purchase it for my MBP – my primary computer – but I’d probably pass on my iMac, since it’s primarily an FTP/Storage machine.