You are here: Home / Lifestyle / How Much Are Vintage Apple Products Worth? 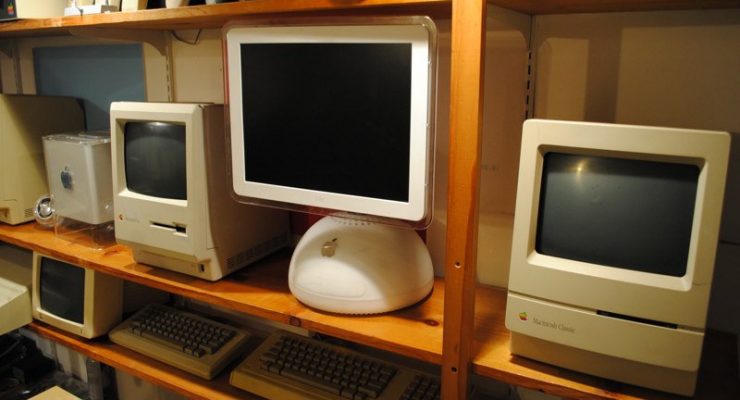 Last week I was in an Apple store and a man came into the store with the original iPhone, the kids at the Genius bar were gushing, they said they only saw this once every few months and their excitement got me to wonder “how much are vintage Apple products worth?”.

The guy in the Apple store who was trying to get his first generation iPhone fixed wasn’t looking to sell it. He seemed like one of those charmingly practical old guys who is barely aware that there have been six updates to the phone since his daughter bought it for him several years ago. But for some collectors, the chance at an unboxed iPhone or a mint-condition classic Macintosh is worth a bundle.

The original iPod hasn’t become a real collectors item yet. There aren’t very many of them that are unboxed because people didn’t really know what to expect of the product in 2000. The Newton that Apple had been relatively unsuccessful. It was a good learning process for the company and a step in the right direction but not a great product. If you do happen to have an original iPod that’s still in the case then you might be able to get a decent amount of money for it. I haven’t been able to find any of them online anywhere but they certainly aren’t showing up at Christie’s quite yet.

The Apple 2 is worth just over two grand, maybe even a little less. There’s actually one on Ebay right now if you’re interested. The computer, which was released in 1979 is the model that allowed Jobs and Woz to get Apple recognized as a legitimate business. They made the computer for several years before upgrading to the Apple 2 plus. There were more than 5 million copies of the computer sold so it’s hardly a collectable. If you do have the Apple 2 then you want to make sure it has the logo on the top since that’s what matters to most collectors.

If you have an unboxed first generation iPhone then you’ve definitely made your money back. There are a few original iPhones on Ebay, all of them over five grand. Some are as high as 25k but you probably don’t need to shell out that much money for the original model. There were millions of these made so it’s going to be several years before you see huge returns. Also, you have to remember that the original iPhone is only available with AT&T Wireless so if you’re a Verizon customer then you’re out of luck if you want to use it.

If you’ve stumbled upon an Apple 1 then you might be able to retire a little bit early. The very first computer that Woz and Jobs first sold in 1976 for $666.66 is now worth somewhere above 350k. I found a Christie’s listing in 2014 that one was sold for 365k in 2014 and in 2013 somebody bought the model for 390k. One year ago, the LA Times reported that a woman dropped off an Apple 1 computer at a Silicon Valley recycling facility. The facility realized what they had stumbled upon and sold the computer for 200k, but they have not been able to find the woman, who they’ve said deserves half of the profits.

The idea of collecting computer products is obviously relatively new. There are only a handful of museums dedicated to computers. The Computer History Museum located in Mountain View was established in 1998 and is probably the best museum that you can visit. They even have an Apple 1 on display, and why wouldn’t you want to see the computer that Woz and Jobs sold out of a garage.