by Michael 16 years ago8 months ago 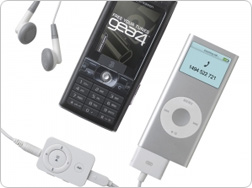 British firm Gear4 has unveiled it’s newest iPod accessory, BlueEye , and it has some features that help it stand out from the crowd of iPod Accessories on the market. The device attaches to the dock conn found on most iPods and synchronizes key calling features with Bluetooth enabled cellphones. BlueEye has some expected features like pausing music during calls and caller id, but Gear4 takes it one step further by allowing users to dial the last called number on their cell phone directly from the iPod.

BlueEye also serves as an FM Tuner with 15 presets, and basic music controls, making it a replacement for Apple’s Radio Remote. Gear4 expects the device to ship in November for Â£50 ($93 US).