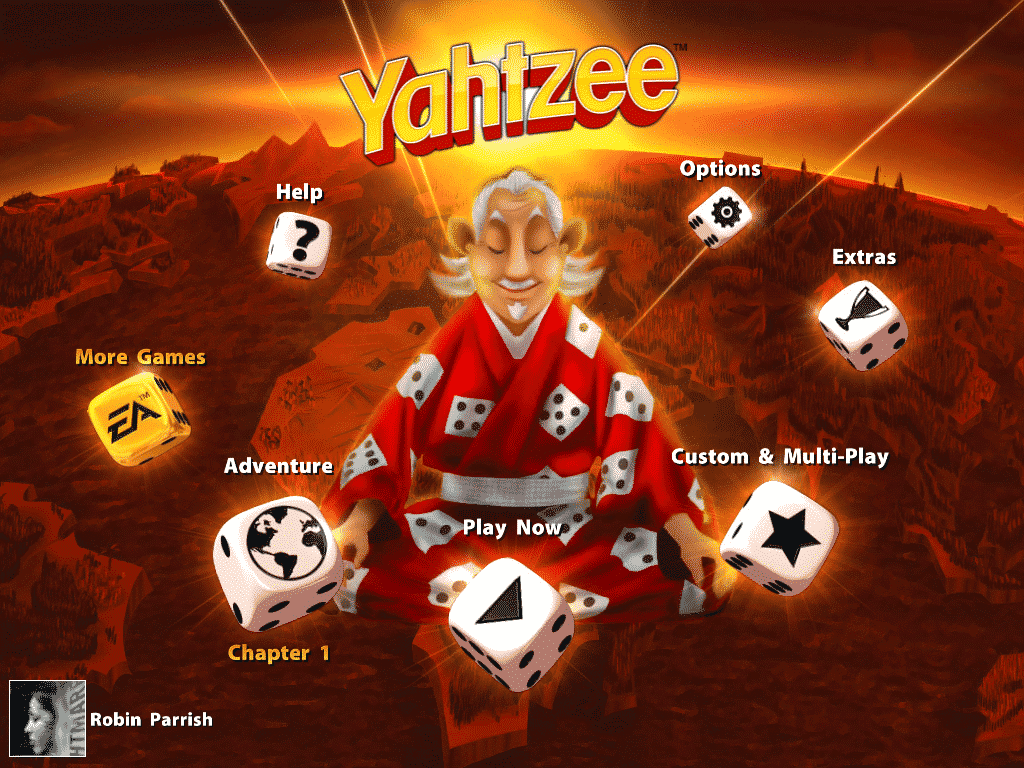 Whether you want to jump into a quick solo game or play against opponents (both real or virtual), Yahtzee for iPad is a terrific, visually rich experience that rarely disappoints. For serious fans of the original dice game, it’s an absolute requirement.

I can’t say enough good things about the graphic and audio experience. The game is a visual feast, providing endless special effects when you roll well, and the audio is just as rich. No detail has been overlooked; I appreciated that there’s a different rattling sound dependent on how many dice are in the cup. That attention to detail carries over into the gameplay, where there are so many ways of playing and extending your experience, I don’t think you could ever run out of things to do. 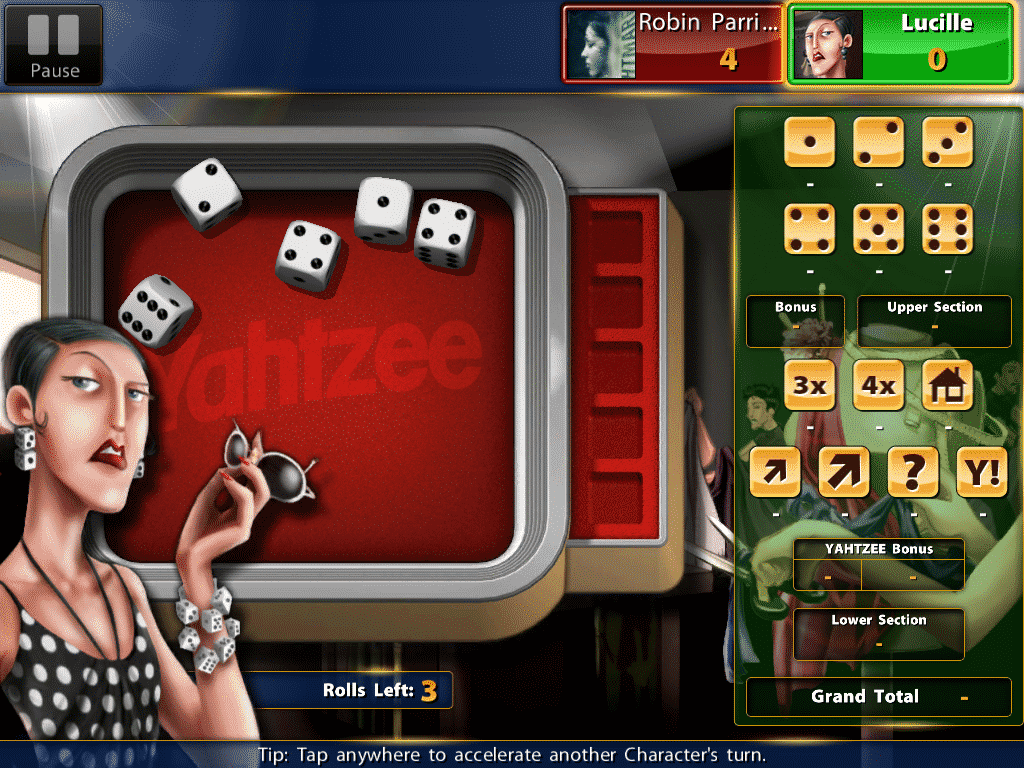 The entree is the “Adventure” mode,Â which is basically a campaign of all of the different Yahtzee games strung together, where you battle a lineup of ten different Yahtzee “adventurers.” The attempt at adding a story to this mode is completely unnecessary, and your opponents are hokey caricatures that offer nothing to enhance the gaming experience. At times they’re downright annoying, particularly when they offer speech bubbles with “advice” in the middle of a game. Defeat one of them, and your reward is unlocking a silly bio about them in the Extras menu. 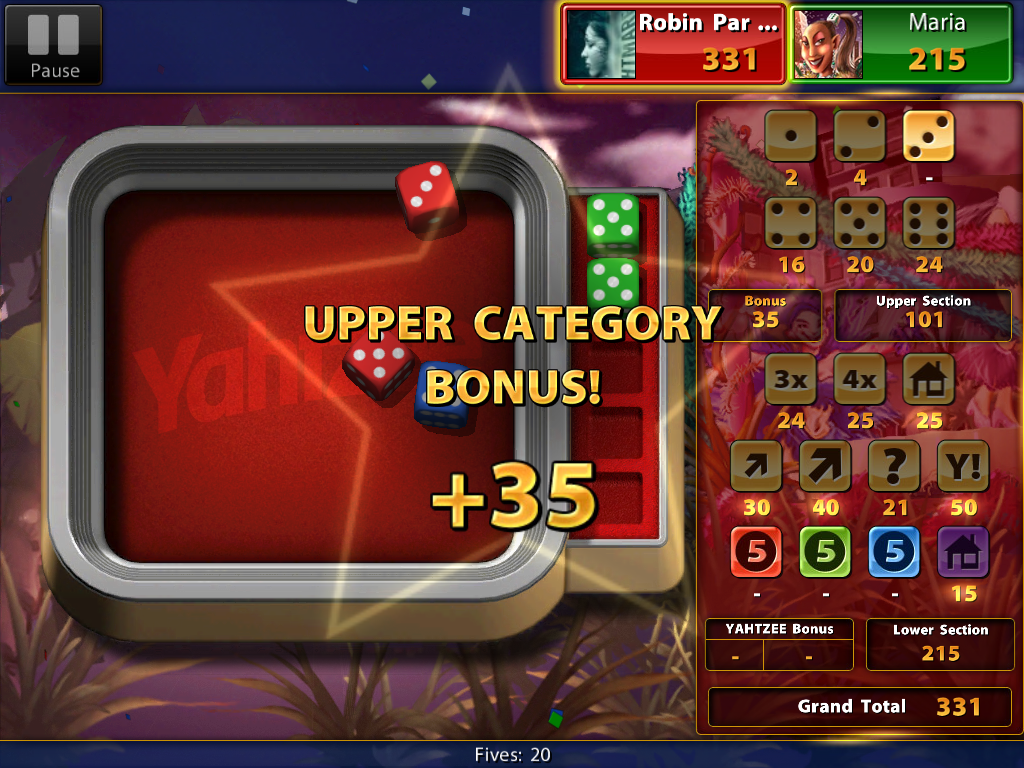 Otherwise, though, Adventure mode is a blast, walking you through every one of Yahtzee for iPad‘s multiple game modes — and there are lots of modes to enjoy beyond the classic Yahtzee game that everyone knows. I found a new favorite in Rainbow mode, which adds colored dice to the mix, allowing you to score extra points when you match up colors. Like all of the added game modes in this game, it’s a way of playing that would never work in the real world — the colored dice are inserted at random. But that’s just one of many incentives to play this virtual form of the classic. 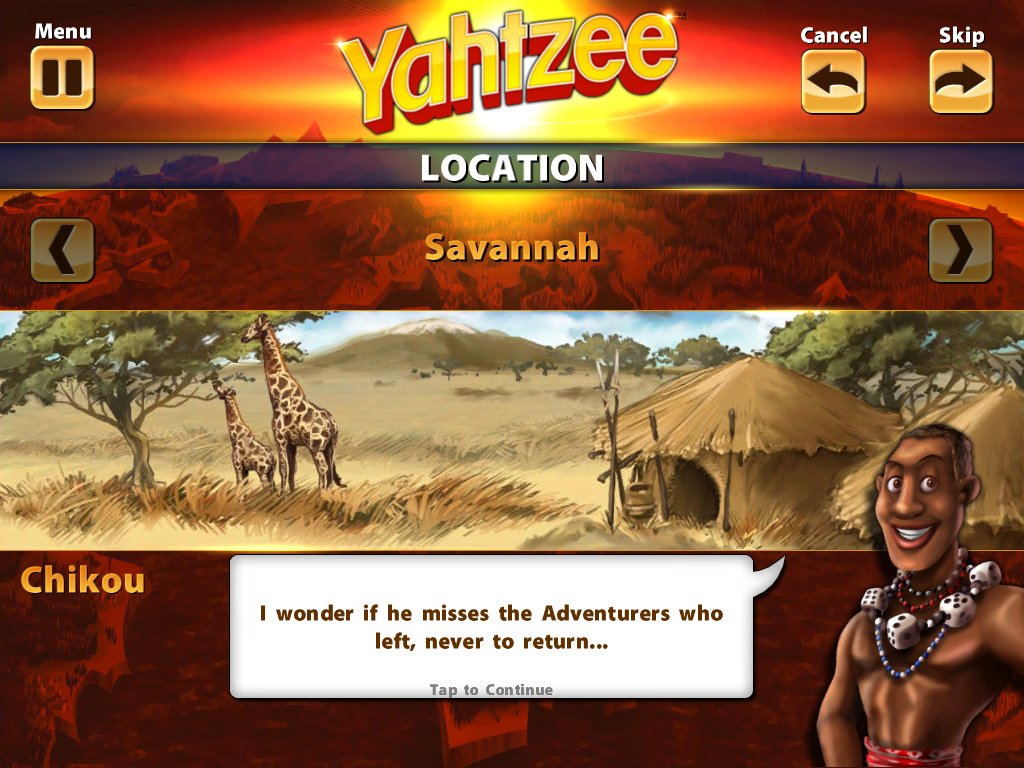 Duplicate mode is one I could have lived without, though. It’s a clever idea: you and your opponent both roll the exact same numbers on your dice, with all three rolls in your turn. Turn for turn, you match one another exactly each time the dice are rolled. The winner of the round is ultimately determined by how smartly you make your scoring selections. I found this mode frustrating, as my A.I. opponent thought so much like a computer that it was almost impossible for him or her to make a mistake, making it very difficult for the player to beat them. 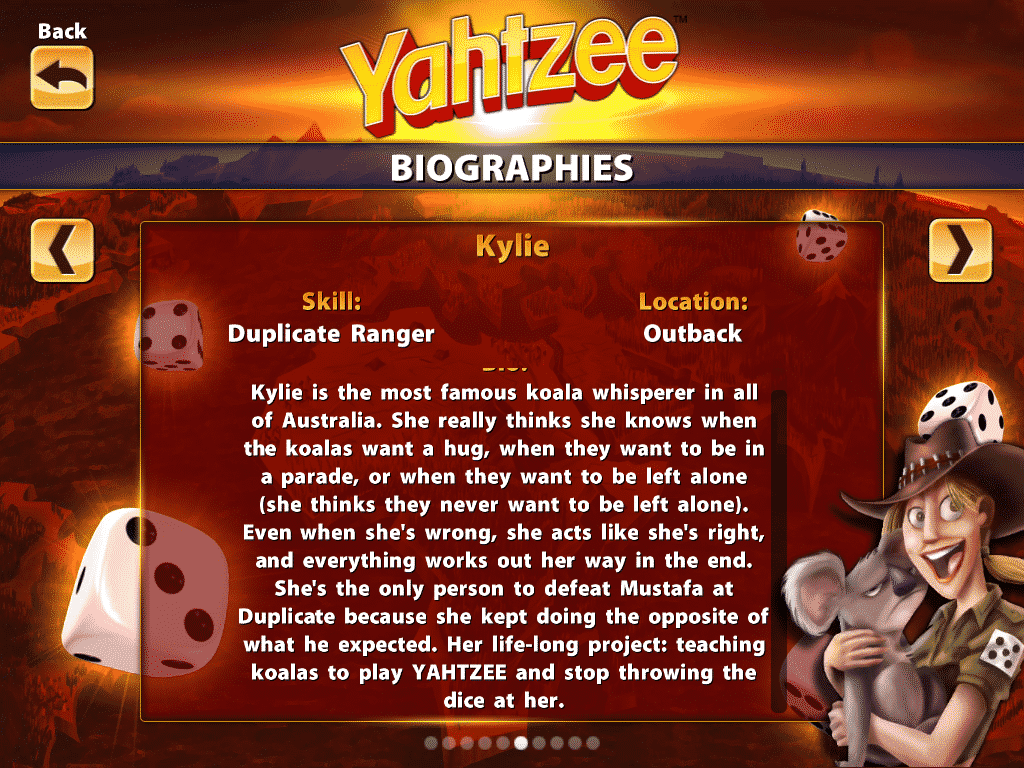 Battle mode is another welcome new addition, though it can be very challenging. Strategy is the name of the game in this go ’round, as your pitted against up to three other players in a game where every roll you throw has the potential to be an attack on your opponents. Every player starts with 100 points. If you land a roll that gives you points from the bottom half of the score card (where hands like Full House, Straights, and of-a-Kinds are located), you can use the points you score as an attack on one or more of your opponents. Yahtzee is the most coveted roll, of course, as it takes a full 50 points from every other opponent, and can end the game quickly. If you score on the top half of the card (where Ones, Twos, Threes, etc. are), you add those scores to your own total, essentially “healing” yourself from other players’ attacks. Mix in a Chance that adds or subtracts points at random, and Battle is a fast-paced, unpredictable game that can be a lot of fun. 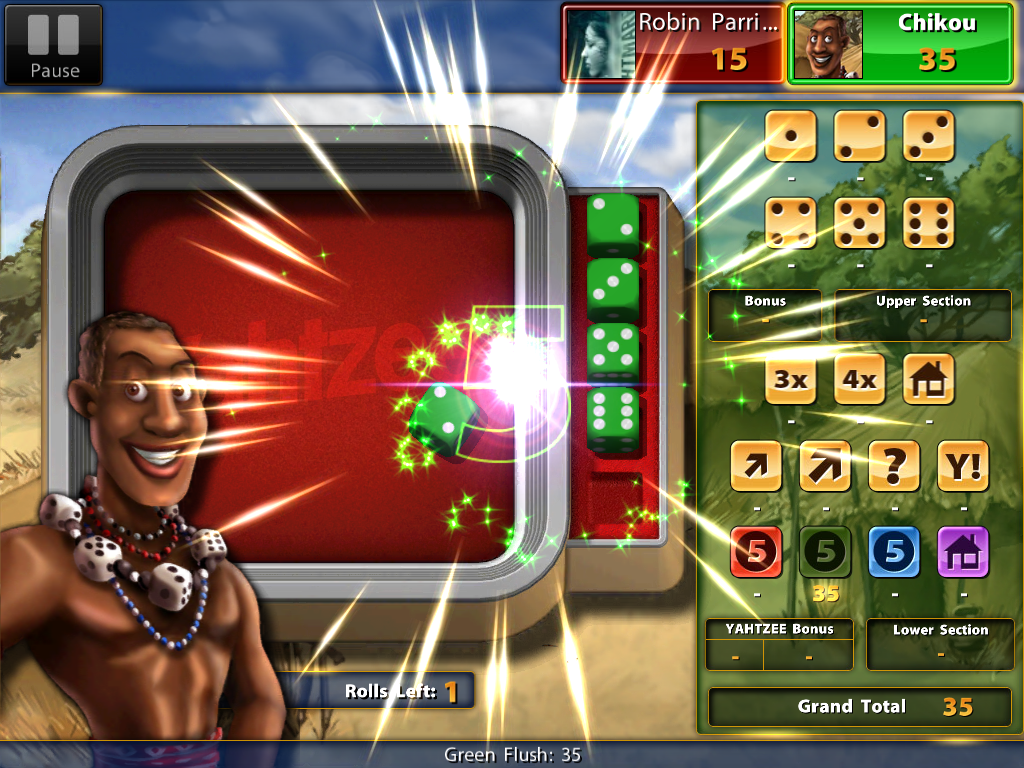 If you don’t want to bother with the Adventure campaign, you can jump into a quick game at any time, using any of the various game modes. Choose your opponent(s) and get to it, no waiting. You can customize your game or even choose to play against a friend. Yahtzee for iPad features full Facebook integration, so you can post your high scores and achievements directly to your wall from inside the game. There are also Achievements to unlock, other Extras to explore, and tons of Options.

Yahtzee for iPad is an extremely robust experience, and for $5, a tremendous value. If not for a few minor quirks, it would get a perfect score. As it is, it still gets my highest recommendation. 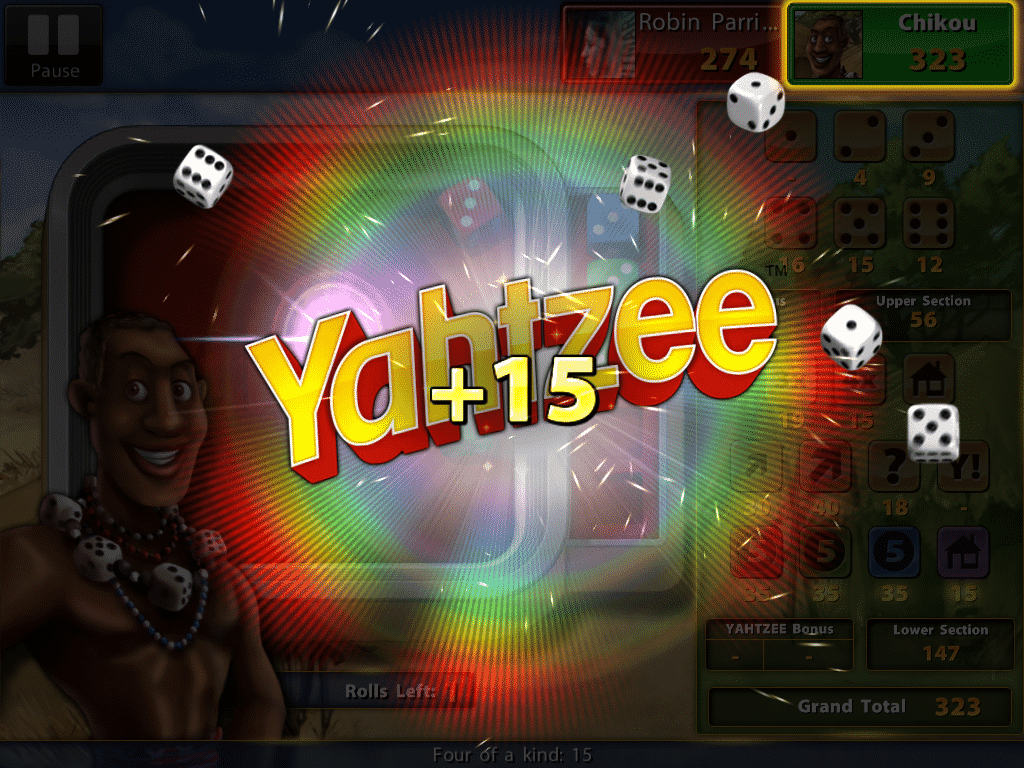