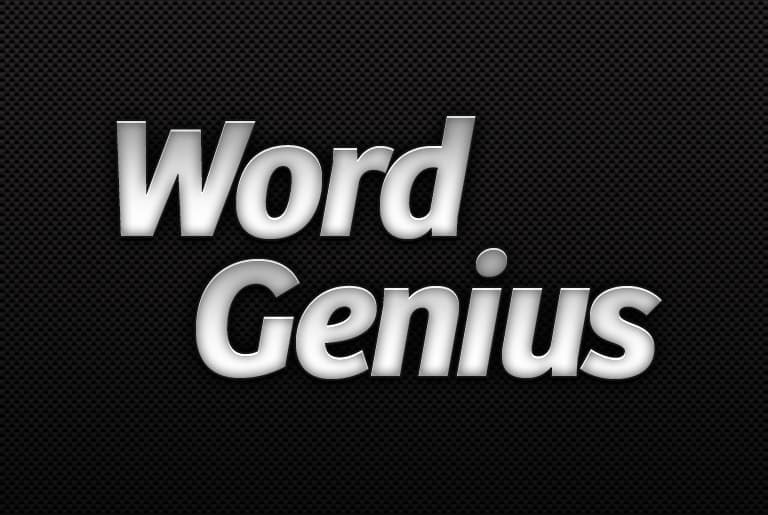 Just about anybody who’s played games on Facebook has at least tried out Scramble. It’s a 4×4 or 5×5 block of letters where you connect consecutive letters to form words. The more words you find, the better your score. It’s a simple but surprisingly addictive little word puzzler.

Catnip Media brings the fun of Scramble to the iPad with WordGenius, which works nearly the same as its Facebook counterpart. Just like the understated simplicity of the iPad itself, connecting the letter blocks in WordGenius by tracing them with your finger adds an elegant, intuitive aspect to the game that Scramble’s mouse controls simply can’t match. See a word? Swipe it with your finger. It’s that simple. It also allows the game to move a lot faster. 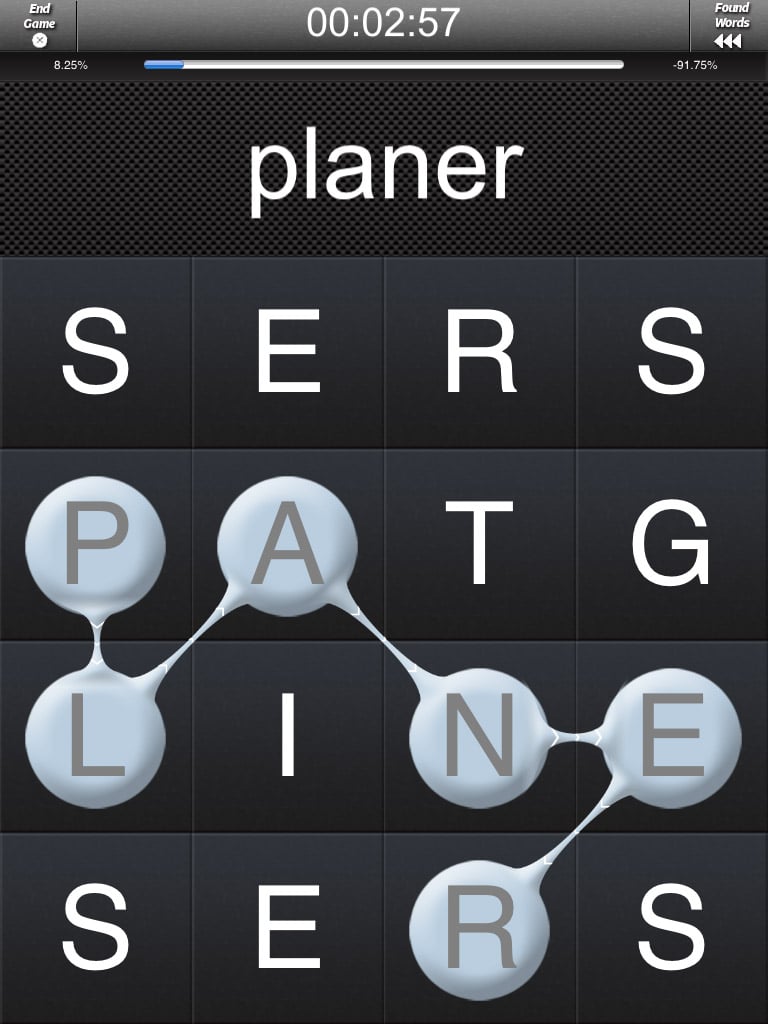 There are three basic modes of play available. “Versus Clock” pits you against a countdown clock to find as many words as you can before the timer runs out. When the timer runs out, you get a screen that shows all the words you got and missed. “Completion” lets you attempt to find every word hidden in the puzzle and counts how long it takes you to do it. “Complete Genius” is the same idea, but it uses a preset board made up of 4×4 tiles (the other two modes let you choose your board size) with more than 1,000 words hidden within. This is by far the hardest of the three to finish, but many players will also find it the most fun. The game comes with only one of these 4×4 Complete Genius boards, but exiting the game or the app will simply save your progress so you can continue it another time. 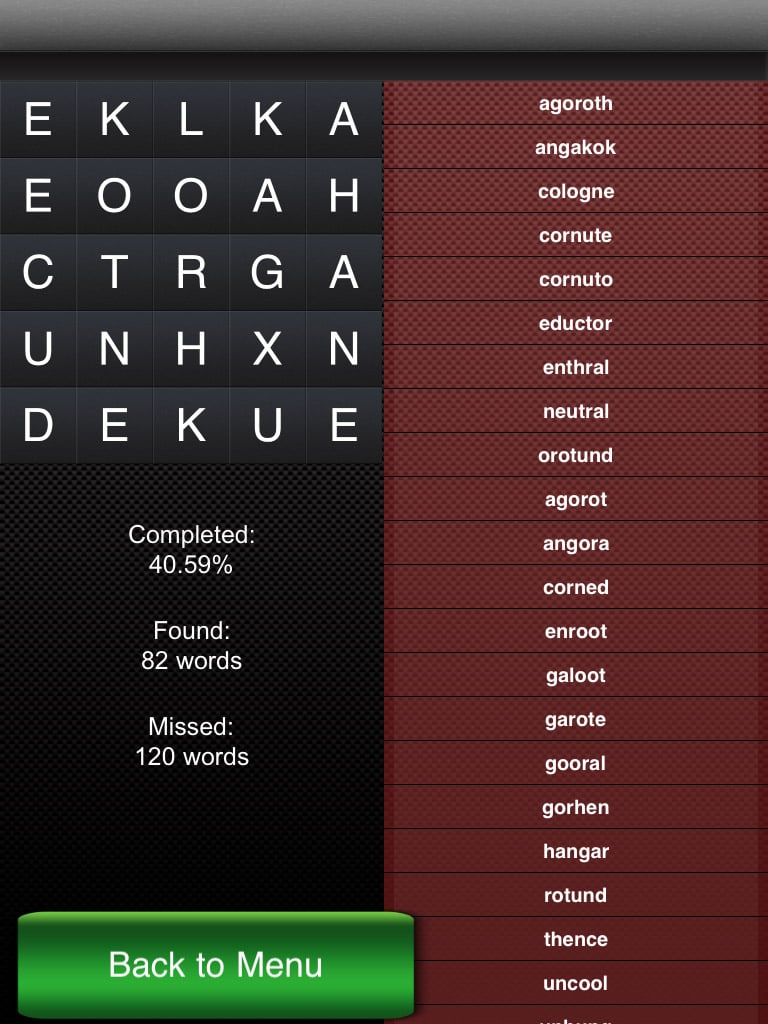 WordGenius offers a surprising amount of customization options, which allow you to play the game the way you want to play it.Â Your board size can range anywhere between 3×3 and 8×8. You can set your time limit between 1 and 5 minutes, or all the way up to 10 or 15 minutes. You can change the minimum word length from the default 3 to 4 or 5. The game also keeps detailed stats on your complete history with the game, including your best efforts.

Some of the words hidden are words that I guarantee you’ve never heard in your life. Like Facebook’s Scramble, words have to be at least 3 letters long to count (unless you change the aforementioned minimum length). But some of even these 3-letter words are so obscure that they seem like gibberish. More often than not, I find many of these just by randomly swiping strings of 3 letters.

The biggest gripe I have with the game is that it doesn’t swivel when iPad is rotated; it can only be played in portrait mode. This gives the game an “iPhone app” sensibility, like it’sÂ somewhat “less-than” than other iPad apps, despite its high-def graphics. But it turns out this serves an in-game purpose: once you’re playing a WordPress puzzle, when you rotate the iPad, it turns the letters within their blocks, allowing you to see hidden words from a different perspective. 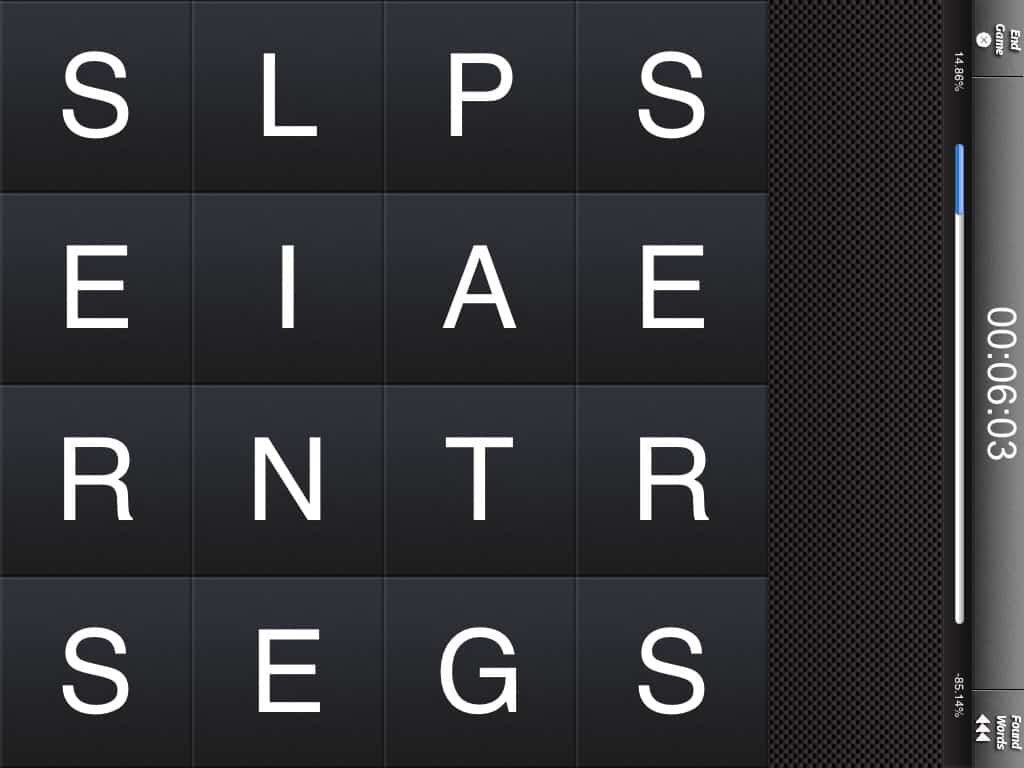 Unfortunately, WordGenius seems to be oddly attuned to the iPad’s accelerometer. Unlike other apps that rotate well at even the slightest angles above horizontal, WordGenius requires an almost perfect 90-degree angle to rotate its letter blocks. Hopefully this hyper-sensitivity will be fixed in a future update.