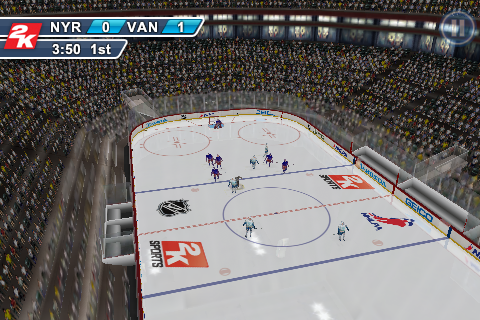 How do you port something with complex controls like a sports title to a small, touchscreen device. That was the dilemma faced by developers at 2k Sports, but they more than succeeded with NHL 2K11 for iPhone and iPod Touch, thanks to a smart, intuitive interface and gameplay that keeps a firm hold on the fun factor. 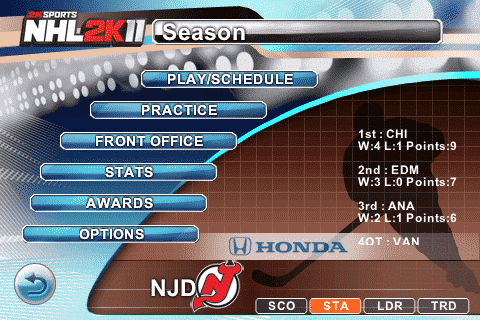 NHL 2K11 has to sacrifice a bit on a few specifics and lesser-known hockey rules, but the game in no way suffers for it. If anything, this streamlined version of ice hockey might just be more fun than the real thing, because it’s so fast and fluid. The graphics are quite good, taking advantage of the iPhone’s processing power, and the animations are smooth and realistic. But the real focus should be on the gameplay, which is finely-tuned, with slick controls and an absolutely insane amount of options.

Actual NHL rosters for the 2011 season are at your fingertips, allowing you to pick any two teams to match up. Game modes include Quick Game for jumping into a fast game, Free Skate where you can hone your skills without the pressures of a live game, and Cup in Season mode, which lets you play an entire season’s worth of games, complete with statistics, trades, awards, and even the Stanley Cup itself. 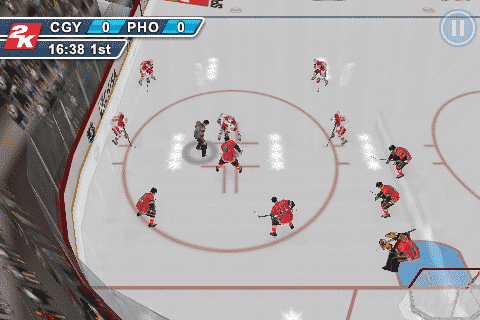 The control scheme consists of a virtual analog stick in the bottom left corner for moving your players around the ice, and three virtual buttons in the bottom right corner for all of your actions, which change depending on whether you’re playing offense or defense. Holding down the buttons powers them up for stronger actions. This power-up ability is what gives the controls their versatility; the same button that lets you check another player will also slam them into the wall if you hold it down long enough.

The most surprising aspect of the game is its nearly infinite customization options, which allows for tons of replayability. This is one area where developers could have been sorely tempted to cut corners, but instead they went all out. In addition, 2k Sports is planning periodic updates throughout the 2011 season, which will keep the game fresh. 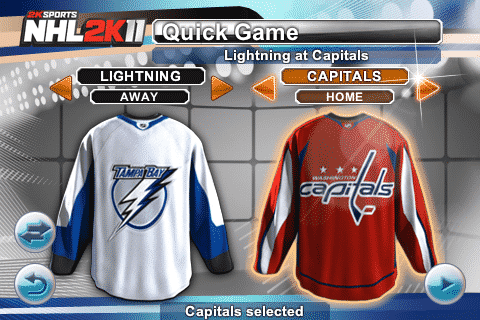 My only qualm with the game was that at times, I had difficulty following the tiny, on-screen action, such as which player had the puck. But I imagine this stems more from my own status as non-sports fan, and shouldn’t be an issue for genuine hockey fans.

NHL 2K11 is an incredibly robust title, with intuitive controls and tons of options, and all at the unheard of price of just $1.99 in the iTunes App Store. 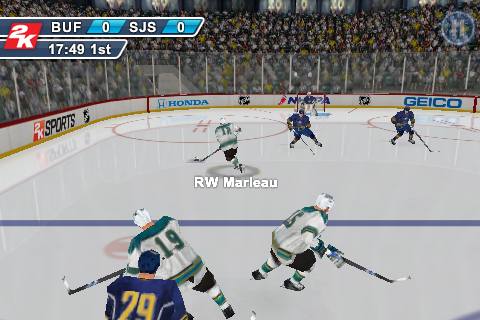