iOS Is the King of US Web Traffic

There may be more Android phones and tablets out there, but the latest data shows that iOS is the king of US web traffic. This should not really be a surprise, as we have seen iOS dominate web traffic for a while now, and we know that more and more people are using their mobile gadgets as their go-to devices to connect to the Internet.

Business Insider just released a chart (oh, yes; we love charts, don’t we?) showing just how iOS really is the king of US web traffic. 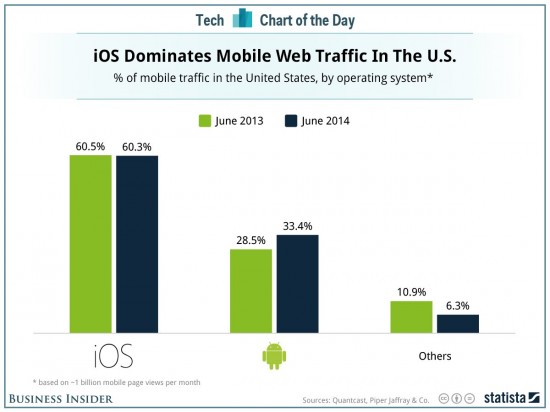 Looking at that chart, iOS clearly stands above the rest with a 60 percent market share, with a very slight increase from June of last year to this year. While that is quite impressive – second runner up Android only has 33.4 percent market share – the increase might be something to be concerned about, especially considering that Android has had a not insignificant increase from 28.5 percent last year. Then again, one could say that making gains when you’re at such a high level is not made by bounds and leaps anymore.

Things may change with the new iPhone 6 coming out soon, though.

This Chart Shows Where Apple’s Money Comes From