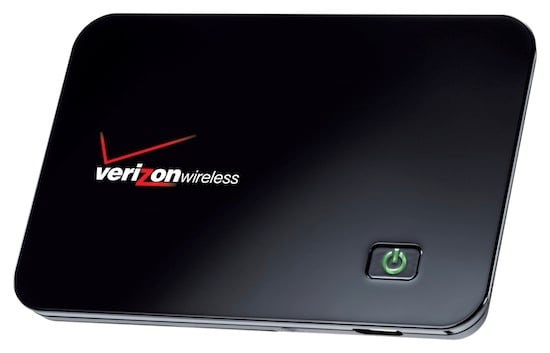 I love my iPhone. But the fact remains that it doesn’t have one of the features that was promised to me a long time ago, which would make my life much easier – tethering. My travel schedule varies, but when I am on the road, I’d like to use my iPad/MacBook Pro as well. That typically means paying for some hotel’s Wi-Fi, which almost always costs $10 a day depending on where you stay. And since most of my trips seem to be to Vegas, it’s typically $15 a night.

But even if the iPhone did tether, let’s face it: AT&T’s service sucks. It may be alright in some places, but in the spots where I roam, there are lots of connectivity issues. So even if I could, I really couldn’t tether my iPhone to any other device because I just wouldn’t be able to get a connection.

But let’s take this one step further. Say you have a new iPad, but didn’t spring/wait for the 3G version. What if you can’t find a Wi-Fi hotspot?

To test all of my theories, I called up Verizon and had a Mi-Fi demo unit sent to me for review, which I sent back a month later. For 30 days I blogged, used my iPhone in remote locations, and used the Mi-Fi whenever I thought about it.

The Verizon Mi-Fi is a mobile hotspot designed to provide Verizon’s 3G network to anyone who logs in. The device is password protected, and up to 5 people can connect to the device by typing in the password located on the bottom of the small black box. When you connect it to a USB source, it not only charges, but it also tethers to that device, making it a 1-man operation. When tethered, it does not allow other people to join the network.

Using the Mi-Fi without the tether was a dream. There’s really no special setup needed. Just turn on your iPad/iPhone/MacBook and search for a Wi-Fi network. Once you find the Verizon signal, type in the password and voila, you’re good to go. I used the Mi-Fi when I live blogged the iPad launch back in April, and I didn’t have any problems. I kept it in my pocket while I blogged away, with a solid signal the whole time. I used it again up in North Scottsdale – a notorious AT&T dead zone – and got a signal every time. I even used it in my living room and got comparable speeds to my 3G connection on the iPhone.

Using the Mi-Fi as a tethered device though wasn’t as promising. I used it fine without the special Verizon VZW access program, but once I installed that, everything went to hell. I actually restored from a Time Machine backup to get out of the thing, because it sucked that bad. But when it was working, I didn’t notice any faster speeds than I did when the device wasn’t tethered, leading me to believe that it’s just better to use the thing without the USB cable, unless you need to charge it.

At first, that all seemed really expensive to me. But here’s my rationalization: If I travel just 4 days out of the month, and I pay for Wi-Fi for those 4 days, then I’m covered. I’m by no means a traveling machine either, but if I was, this would make more than enough sense.

I will say that in town I didn’t use it as much as I thought I would. I don’t think this is the type of device that you carry with you every day. I think it’s more the thing that you have handy should you need it, but it won’t make the trip to Circle K when you get that Red Bull.

Would I buy one? I’m debating it, frankly. But now that some Palm devices are offering built-in Mi-Fi connectivity, making me think that AT&T is going to have to enable tethering soon or get left behind. Of course, there is still that rumored Verizon iPhone …

The end result is that this isn’t the device for everyone. If you don’t travel or have connectivity issues that requires something like this, don’t get it. But if you do, this is a pretty handy fit and it’s not priced too bad either.