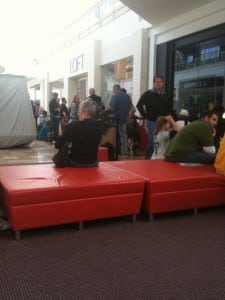 It’s 7 a.m. when my alarm goes off. As usual, I pivot myself off the side of the bed, pick up my iPhone, and go through my Facebook and Twitter feeds. I’ve never woken up so depressed in my life.

That’s because half the people on the east coast have already received their iPads, and I’m not on a list to buy any of them.

I get to the Apple store at the Chandler Fashion Center in Chandler, Arizona, and I see the line. It’s done a lot better than the lines for the iPhone as I recall, with little breaks in the line for access to other stores. There are a lot of people here at 8:25 – easily 100 or so, although it’s difficult to tell who’s here for the iPad and who’s just here to watch like I am.

8:37 – Loud noises coming from the store. All the windows are blacked out and the security door is shut as well, so no one can tell what’s going on there. First guess though, after hearing a few “woot” and clapping noises, is that the staff is preparing for a busy day. I wouldn’t expect anything less.

The conversations here are a it different than normal talk heard at the mall. I’ve heard a few people discussing the latest downloads they’ve already purchased, and I’ve seen more than one person playing on a Nintendo DS.

8:41 – “Is this the line for the iPad?” What, you can’t tell by the people wearing the fedoras who smell like they haven’t showered in days?

It really is interesting to look at the vide variety of people here in line. There’s a girl at the front who’s mildly cute, but something about her tells me that she’s not the social type. Then there’s the talkative guy at the front of the line – wearing an Apple shirt no less – who seems like a really cool guy with a very nerdy streak. 5 people back from them is a normal family who doesn’t have anythingÂ noticeableÂ about them. They don’t seem like fanboys at all, yet here they are, and they obviously got in line early enough to be ahead of 90 others.

A lot of other words are heard here as well. “Revolutionary.” “Game changing.” “Maxed out my credit card.” Things like that.

When I first got here, I figured I’d stand out from the crowd a bit, sitting in a corner with my laptop on my lap, typing away like nothing was going on. As it turns out, I’m just one of quite a few people here with a glowing Apple logo coming from my torso, and all of them look like they were produced in at least 2009 – no OG MacBooks here.

I never noticed this about the mall either, but there are little laptop stands positioned at these seats just outside the store. I’m not using one though, because it forces you to look at the person directly to your left. In my case, that’s a dude who’s intently focused on his iPhone – probably playing a game or something. 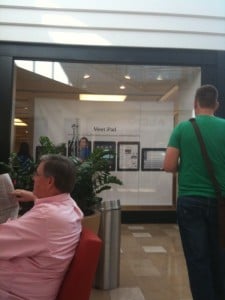 8:47 – Security just rolled by. That’s right, rolled. The easily 60-year-old security guard rides a Segway and wears a helmet. He pulls over, then grabs some of the chairs that customers had moved into the line and moves them back to their normal locations.

BTW, I’ve got an excellent signal in here. That’s because I’m using a Verizon Mi-Fi – a demo unit I got a week ago to review here and on Forever Geek. My iPhone? I’m just not going to trust that for this.

8:49 – More cheers. Really loud. I’m really, really upset at this point that I don’t have an iPad on order. Of course, I want the 3G model so in some respect, I suppose that should make it better. At least that’s what my wife told me. Somehow, it doesn’t make it better.

I’m looking a bit more at the first 4 in line, now. It’s the guy in black, two very obvious college-age fanboys, and a woman in her 40s who doesn’t look like she belongs.

8:51 – Apple store employees show up with video cameras, here to film the event. The guy in black mentions that he’s been there since 4:30, and exchanges a hug with one of the camera guys. I assume they know each other. I also can’t believe it’s not butter.

Behind the 40 year old is a guy in full Arizona State University gear. Nice guy, also doesn’t look like he fits in.

8:53 – Employees take down the black signs in front of the store and iPad signs are displayed. The security grates open up and now we can see people.

8:54 – Doors open. Lots of cheers, lots of Apple employees. The sun is starting to glare on my screen now, and I’m regretting not getting a matte screen.

8:55 – Suddenly, the line snaps to order. Everyone is making sure they’re in the right place now, and it’s pretty impressive. It looks like the guy in black is going to be customer No. 1, but the fanboys are 2 and 3 – or maybe it’s the other way around. I’m still shocked at how many people have showed up for a product they most likely pre-ordered, but then again, I’ve heard about a line here for people who haven’t ordered yet.

8:56 – Lots of cameras in Apple employee’s hands. They’re all Canons, with really nice lenses. The photographer in me gets jealous. The bastard in me wonders if I could take one of them. 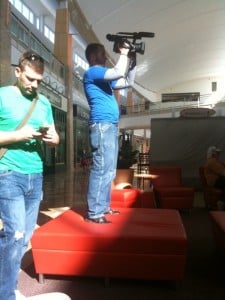 I suddenly become acutely aware of the amount of dust on my screen. Guess I should wipe that off every so often. Wish I had a microfiber towel right now.

8:57 – Clapping and cheering, but it sounds like it’s coming from the far end of the mall. As it turns out, it is. It’s becoming almost deafening in here, but from my vantage point, I can’t tell what it is. I wait. It’s Apple employees, walking and shouting down the line, high-fiving customers, clapping, andd cheering. I feel like I’m at a Stones concert.

8:59 – There are easily 40 Apple employees here. I wonder how they’re all going to fit in the store, much less all of the customers. People start filing in, guided by the employees.

9:00. The line is moving very quickly. In under 30 seconds, easily 30 people are in the store, lined up somewhere that I can’t see, to get their devices. I suspect that since this is a lot of pre-order, that the line will move quickly today.

9:02 – I change my mind. The iPads are on little stands, pivoted at a 45-degree angle to the table. It makes them easy to view and play with. Then there’s another counter full of iPads, and these are about 10 degrees off the work surface, so that people can type on them.

9:03 – I notice that one of the Apple employees is really hot. It’s almost unnerving how much so. I start to wonder if it’s important to note that here, and say “screw it” to myself.

The guy who bought one is unboxing it right in front of me. 3 feet from me there’s a guy with an iPhone shirt talking to security, booting up his iPad. “$542 for the 16GB,” I hear him say.

9:07 – Holy crap is this line moving fast. They’ve gone through easily 30 people by now, and I can’t even believe how efficient it is. I really want to go in and play with one, but I also understand how this works. There’s no way I’m going to get to play with one in the next hour.

9:08 – I decide that my part in this event is over. It’s looking successful for sure, and the people playing with their new iPad in front of me makes me more than a little bit jealous. Good event for sure. Now let’s see what happens for the 3G launch.