Can iTunes Radio Compete With Spotify and Pandora?

by Brian Meyer 9 years ago3 months ago
1 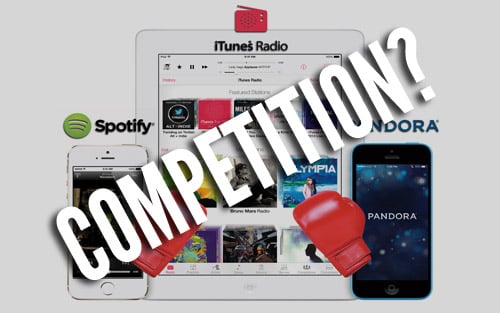 With the launch of iOS 7, Apple started offering its users iTunes Radio, a purposed Spotify and Pandora killer, but can iTunes Radio stand up to these streaming giants and possibly even become competition for them? It’s still early to say, but it’s possible. 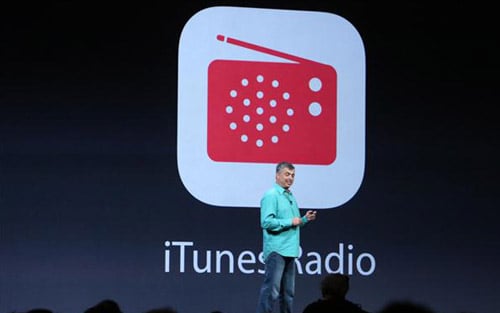 Since iTunes Radio is not widely used yet and isn’t as understood as some other Apple features, a little back story is in order. iTunes Radio was announced at Apple’s 2013 WWDC and was launched in September of 2013 with iOS 7, even though it was available to beta users before this.

We’ll get to the service and advertisement aspect momentarily, but once the service launched it was maligned with issues ranging from not working at all to ads playing while the premium service was enabled.

Cut to today and the service seemingly works without issue on both the desktop with iTunes 11 and on mobile with iOS 7 and above. The service was launched to be in direct competition with the likes of Google Play Music, Pandora, and the crowd favorite, Spotify. Pandora started its streaming service all the way back in 2000 and Spotify launched in 2006, making landfall in the US in 2011.

With these services having such a longer history and more chances to make a better product, one has to wonder why Apple would jump into a market with such big players offering such a great product. Maybe the service is better? 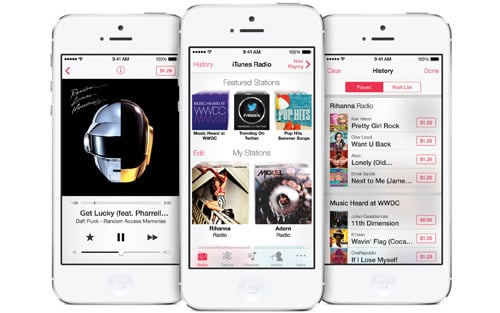 iTunes Radio is offered free to anyone with the newest version of iTunes or an iOS device running iOS 7 and above as well as Apple TVs. The free service comes as ad-supported, but if you opt to pay for iTunes Match for $25 per year, you get an ad-free experience.

What starts off as sounding like a Spotify replacement is quickly knocked down a few notches when even paid users run into track skip limits and the inability to build custom playlists. While Pandora is an amazing service (one that I use daily), the hope was that iTunes Radio would give more options.

The custom radio stations you’re able to create in iTunes Radio lack the variety of their Pandora counterparts and seem more like playlists build off of a specific artist instead of a radio channel built around a specific genre. Pandora and Spotify seem to do the radio station feature far better and with more polish. 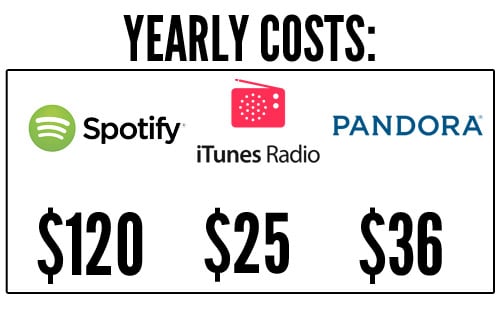 As mentioned above, the initial service is free and ad-supported, with more ads playing than in Pandora or Spotify (Personally, I’ve found the least ads in Pandora’s service). You can opt out of commercials for $25 per year and with this you gain iTunes Match, which itself is actually a pretty great service. If Apple is trying to use this as a selling point for iTunes Match, it’s not executed well at all.

It seems that Apple priced this lower and included it with iTunes Match to give users a much cheaper option to Pandora’s $36/year and Spotify’s $10 per month. While it is definitely the lowest priced in the bunch, it’s so hidden away in both iTunes and iOS that it’s no wonder it costs the least.

iTunes Radio feels like an afterthought to me, unlike the fit and finish of Pandora and Spotify’s apps and websites. I can listen to my Pandora account on just about any computer or mobile device while I can only listen to iTunes Radio on iOS devices I am signed in to and iTunes in which I am signed in as well. No browser support is available.

Unless Apple beefs up the music available in iTunes Radio and gets a better engine running behind the scenes, it will remain a small addition to iTunes devices instead of a full-featured streaming music service.

Apple is really good at making playlists on the computer with Genius, but this doesn’t seem to have moved to iTunes Radio at all. Apple has the power to create a killer app that would make Pandora and Spotify obsolete, but the question is will they ever step up and do it? For now, the answer is clear, iTunes Radio is no competition for these services, but possibly someday we’ll see it rise to the top.