Lala Shuts Down – What’s This Mean for Apple? 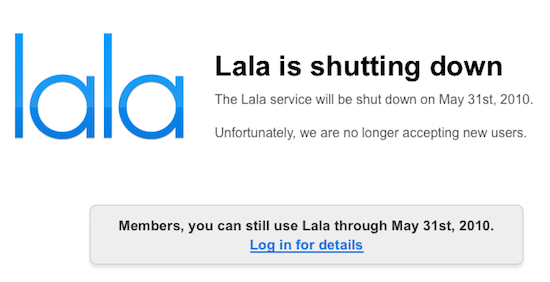 I’ve never listened to lala.com, but I know people who do. At the end of this month, they’re going to have to find another option for their streaming music needs. That’s because lala is closing up shop come May 31st.

You might remember that back in March, Apple bought lala and no one knew what they were going to do with the company. There’s been lots of talk that they’re going to use iTunes as a basis for their own streaming service, and then the other rumor is that they just wanted to buy the company to scalp their employees. Now, almost two months later, we still have no better idea of what Apple is going to do with lala and their employees, but now the rumor mill is stirred up all over again.

There’s another reason for this rumor to come up now, and that’s WWDC. It’s coming up on June 7th, and this is also traditionally the event where Apple announces the new iPhone. Although that’s most likely the case this year again, there is always another opportunity for “one more thing.”

I personally don’t think that this is the time to introduce a new iTunes streaming service. Last I heard their new server center wasn’t done yet, and I would imagine that would have to be up and running before they took on something of this magnitude. My guess is that it will come in with iTunes 10, sometime next year. I’d love to be wrong, but I’m a bit more realistic. I think this WWDC will be all about the next iPhone, and not much else.

But man do I hope I’m wrong.