The Internal Beauty of the iPhone 4 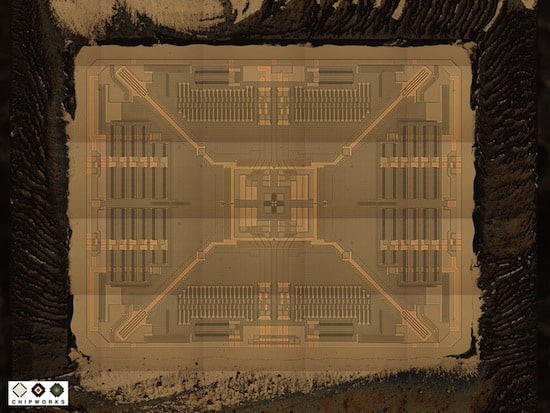 [Image via Chipworks and iFixit]

Sure, the antenna has some issues and the case is a bit fragile, but one thing is pretty much universal: the iPhone 4 is a beautiful device. iFixit tore down an iPhone 4 on day 1, and now, with the help of Chipworks, they’ve got more detailed photos of the gyroscope introduced with the phone, including some microscopic views. The resulting images are just amazing.

What does the gyroscope do though, anyways? Previous models of the iPhone had an accelerometer, which would translate motion on the iPhone into controls on the screen, making games like Super Monkey Ball popular. Some people complained that the accelerometer wasn’t very accurate, others that it was too sensitive. To fix this problem and make gaming more accurate, Apple installed a gyroscope to telegraph movement. So how does that work? iFixit explains:

When a user rotates the phone, the proof mass gets displaced in the X, Y, and Z directions byÂ Coriolisforces. An ASIC processor senses the proof mass’ displacement through capacitor plates located underneath the proof mass, as well as finger capacitors at the edges of the package.

If you’re a bit nerdy – and let’s face it, you probably are – you can also download an iPhone wallpaper of the gyroscope for your home or lock screen, free of charge. Me, I’m definitely a bit nerdy. That’s why I downloaded one as well.