This is How You Do It: Wired Demos Tablet App 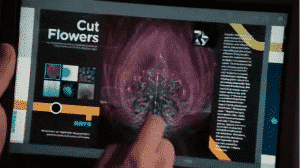 I’m a huge fan of Wired magazine. It’s smart, informative writing with good topics that make you want to delve more into the article. From international espionage to the latest computer product, Wired puts it all out there. A few months back, Wired‘s parent company, Conde Nast, announced that they were creating a new product for digital media. At the time, we didn’t have the iPad, it was just a unicorn. Now though, we do, and better yet, so do they.

What Jeremy and I showed was not a CGI demo or concept â€” it was running live code with real copy. The content was created in Adobe InDesign, as is the case for the print magazine, with the same designers adding interactive elements, from photo galleries and video to animations, along with adapting the designs so it looks great in both portrait and landscape orientation. This is a departure from the usual web model, where a different team repurposes magazine content into HTML, unavoidably losing much of the visual context in the process. Wired.com is not a re-purposed version of the magazine, but rather an separately-produced news service.

Although the Wired Reader starts as an AIR app, Adobe has created tools that allow us to easily convert it for major tablet and mobile platforms. In Barcelona this week, Adobe announced that AIR would run on Android, and Adobe has already announced its Packager for iPhone tool that will allow Flash apps (including AIR) to run on Apple mobile platforms. And AIR already runs natively on Mac, Windows and Linux operating systems.

If the concept is to make it all run through Adobe, then this is going to make the transition from print to digital media amazingly fast. Most publishers I know use Adobe InDesign to create their publications, and if there was a way to seamlessly transition that to the web, iPad and iPhone, then that changes the game. More interesting though, is the bit about the Adobe Packager program that will “allow Flash apps (including AIR) to run on Apple mobile platforms.” Sounds like that workaround I mentioned back in early January, huh?

There’s also a great video of the product, which really makes the case for this product. Definitely worth the click through.

For the love of all that is holy, I hope this works out. If it does, I’m buying an iPad on launch day.