by Kevin Whipps 13 years ago8 months ago
5 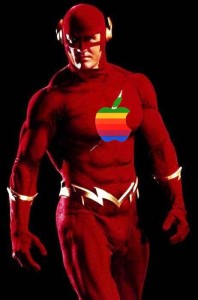 Although I use them every day, I’m not a huge fan of Adobe products. They’re buggy, tend to crash a lot and cost so much it’s ridiculous. Of course, that doesn’t stop the world from using their products, including Flash, on everything they can. The web is particularly heavy with Flash animation, and as such, people have been asking since 2007 why it’s not available on the iPhone. Turns out that soon it might be.

Ed Oswald has a post over on PC World about Adobe’s development of Flash, and how it’s been going on for the past few years, without any help from Apple. Long story short, it’s a workaround. To quote Oswald:

Either way Adobe is not going to wait much longer. Itâ€™s Creative Suite 5 product, now going through private beta, is going to include functionality that will automatically convert Flash applications to ones that are compatible with the iPhone.

Is this a big deal? I’ve spent the past two years without Flash on the phone and I can count on one hand how many times that’s inconvenienced me. Sure, I can see that certain websites might have a problem with it, and some hardcore iPhone web surfers might get a little touchy about the conversation, but ultimately, it’s not that big of a deal to me. At least not on the surface.

But here’s where it gets tricky: If Adobe releases this workaround and it works correctly, then Flash developers could create their own apps and their own app store, and have it all accessible via a web interface, circumventing the Apple App Store entirely. Sound a little bit paranoid? I’ve got a buddy who’s a Flash developer, and that’s exactly how he’s going to do it. Saves the hassle of going through the approval process.

This should come to a head next year when Creative Suite 5 comes out, so it’ll be interesting to see how it all plays out.