iOS 7’s “White Screen of Death” to Get a Fix 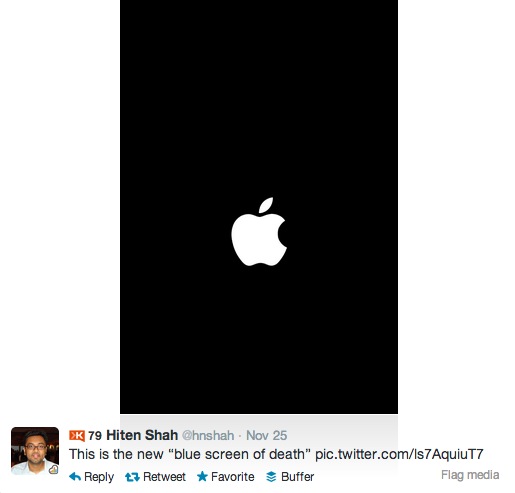 Ever seen that happen out of the blue to your iPhone (or iPad) running on iOS 7? Back in November, Hiten Shah shared his own experience succinctly on Twitter (how else can you share on that platform, anyway?). The “blue screen of death” has long been a bane to Windows users, and that tweet does not really need much of an explanation – especially if you’ve encountered it yourself.

What happens is simple: you may be trying to unlock your iPhone and then suddenly the “white screen of death” shows up. It can also happen while an app is open – in my case, while reading an eBook. After a few seconds, though, things go back to normal.

According to Mashable, though, talk of this glitch started back in September on Apple discussion forums. Soon enough, the complaints spread to Twitter and other social media platforms.

It’s an annoying glitch, to be sure, and I did panic slightly the first time I encountered it. Still, it doesn’t happen all that often to me, so I have been ignoring it. If you’re more than slightly annoyed with the “white screen of death”, you’ll have just a little bit to wait as Apple is supposed to get it fixed with iOS 7.1, Beta 4 of which has been seeded to developers.