iOS 7: Screenshots Before and After

by Robin Parrish 9 years ago10 months ago
7

iOS 7 is now available to download (for free), and it radically transforms your iDevice. I took some screenshots from right before upgrading and right after, and as you’ll see, Apple cares about every last detail.

Here’s a before and after look at the home screen on my iPhone 4S; it’s a great example of just how big the changes are. 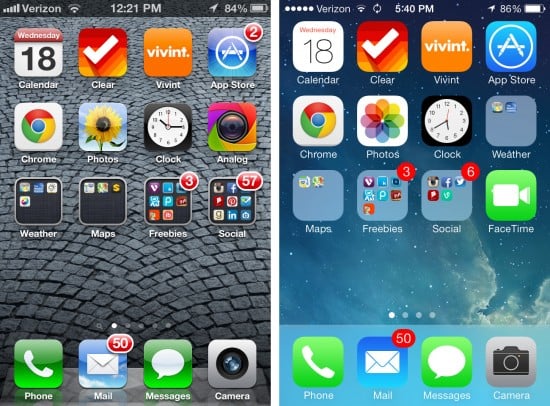 There’s so much new and different here. The status bar at the top is gone, allowing the wallpaper to extend all the way to the top of the screen. The red notification bubbles are just red circles now. The Dock at the bottom is wildly different; the glossy 3D look has been ditched in favor of a simple, translucent bar. Again, the Dock is very representative of the overall changes to iOS: photo-realistic depictions are out while more artsy, simplistic approaches are in.

Even the icons are different — and I don’t mean their artistic style. Their very shape has been altered, with a softer, wider curve on the corners. Here’s the old Evernote icon and the new one, side by side.

Average users may not even detect a difference, but Apple cares about the tiniest of details. Here’s a better perspective on the new icon shape versus the old.

The black area represents the old icon shape that we’re used to from iOS 6 and before. The gray shows you the changes made for the new shape. It’s a very subtle difference, but the curve was rounded off more — and I’m sure there was an important design reason for it. Because that’s what Apple does.

Here’s the iPad’s virtual keyboard, old on top and new on the bottom. 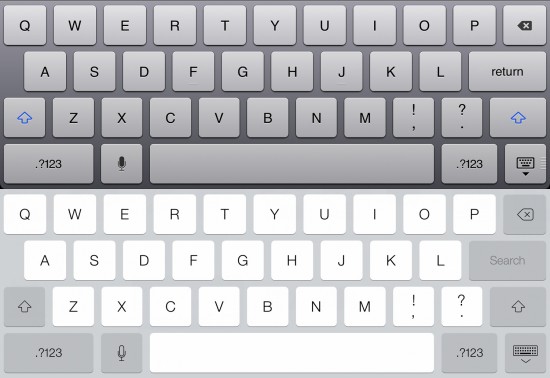 If you were to overlay these two, the shapes, spacing, and even the font used for the letter keys are all identical. The changes here is mainly in the shades of gray. The old keyboard had a slightly 3D feel, with shadows beneath each key. The new keys still have shadows but they’re so narrow they’re barely perceptible. There are some other changes to some of the icons, like the microphone, the “Hide Keyboard” button, the backspace, etc. And the blue on the Shift keys is gone, too. I’m not going to lie: it’s pretty jarring the first time you see it.

Now let’s take a look at some of the standard Apple apps for iPhone. First up, the App Store. 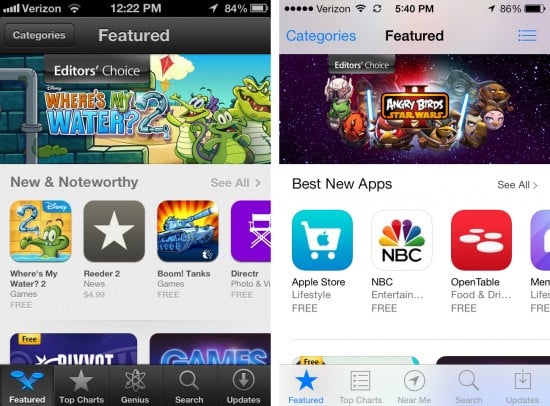 The new App Store design shows off the clean, white look that permeates iOS 7 across the board. But I think the most noticeable difference is how the different sections are spaced out. The tenets of good design teach that white space is an important tool in keeping the human eye from perceiving busyness. Spreading things out a bit gives the app room for bigger, more legible fonts, and lends it an overall cleaner feel. 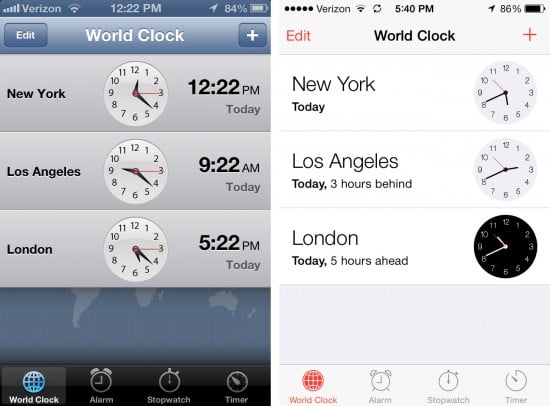 The new Clock app retains almost the exact footprint of the old, but utilizes those larger fonts and flatter colors and designs. 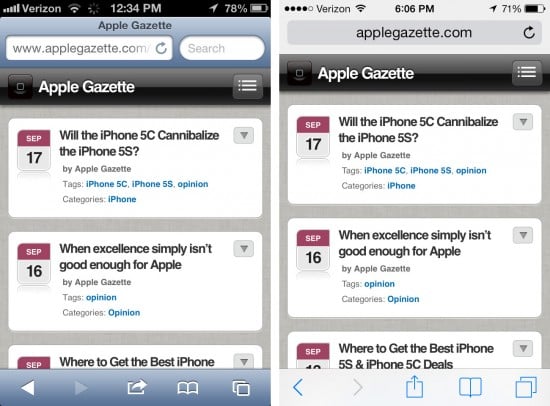 You might think that Safari has merely gotten a fresh coat of paint, similar to the Clock app, but there’s a lot more going on under the hood on this one. Most of the coolest new functions are hidden in the bookmarks and code that renders how web pages appear. But even this surface glance shows that Jony Ive’s mantra of “simplicity” has shown up here as well, and in more than just the colors and icons. Note how the top bar is more narrow than before, allowing for more of the webpage to be viewed; the navigation bars at the top and bottom also disappear after a few seconds. 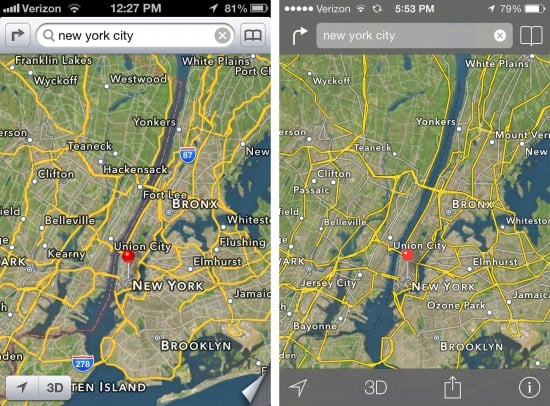 Bye-bye skeuomorphic page curl. Obviously, the biggest changes here are the navigation buttons and bars, but look at the map itself. Text labels have been toned down, so they don’t overwhelm the map, highway signs are gone at this level of magnification, and check out those yellow roads. Instead of a single, uniform width line representing every major highway, the yellow lines are now depict much more realistic roads. Bigger highways have thicker lines, smaller roads have more narrow lines. And look closely at the details of those roads; you’ll see an enormous amount of details have been updated to better reflect the actual geography. Clearly, Eddy Cue’s Maps team has been hard at work. 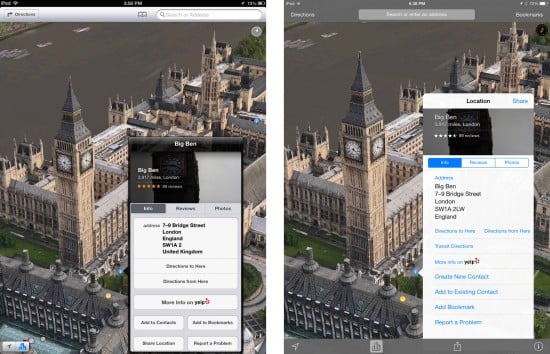 While the basic appearance of Flyover mode hasn’t changed, check out the new location detail view. It’s not just bigger, it’s got more useful info than before. I love the new Bookmarks function! 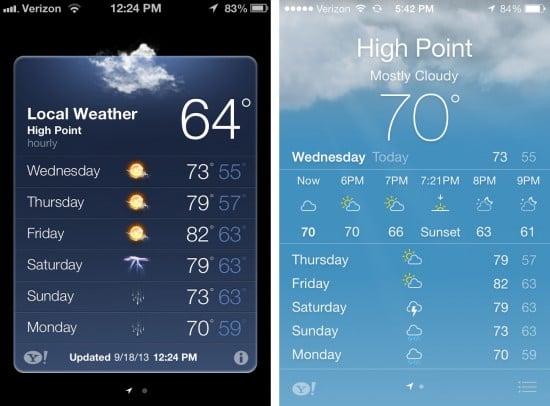 Now here’s an example of how flat design can be more aesthetically appealing than skeuomorphism. There was so much wasted space in the old Weather app. Now, the information fills the entire screen, with some lovely, slow animations in the background and more information at your fingertips. The old app made you tap to get more detailed views, such as hourly forecasts. The new app has those details right there where you don’t have to hunt for them, and they’re situated on a bar scrolls horizontally.

If you’re on the fence about taking the iOS 7 plunge, hopefully the care and attention that Apple has obviously put into its construction and design will help you make a more informed decision.