by Noemi 9 years ago3 months ago
2 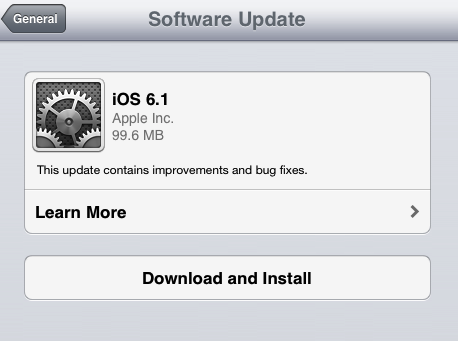 The hundreds of millions of iOS devices out there have been busy in the past 12 hours or so – busy downloading the latest update to the mobile operating system – and if you have not done so already, there is no better time to do it than now. Then again, there might really be no rush to do so.

iOS 6.1 was released yesterday, January 27, following several beta releases to developers. As with any iOS update, users look forward to the changes that will make their experience more fun, more convenient, and maybe more exciting. Can we expect anything of this sort for iOS 6.1?

It is best to bear in mind that this is merely a minor update. That being said, there are changes,  but don’t expect your mind to be blown away. Based on the press release from Apple, notable changes in iOS 6.1 are as follows:

In case you’re wondering – what is the Advertising Identifier? Introduced in iOS 6, this is a device identifier which apps utilize to give the user more control when it comes to the ability of advertisers to track your device and activity. Targeted ads, for example, may be limited if you choose to do so.

How to reset the Advertising Identifier? Go to Settings -> General -> About -> Advertising.

For those of you whose Internet service provider may not be optimal (read: slow as heck), the boon is that the iOS 6.1 update is not that big. That means you won’t have to bang your head in frustration if the update takes longer than you want it to.

Something to take note of, for jailbreakers: You might want to wait just to be sure.

In other news, did you know that more than nine billion photos have been uploaded to Photo Stream (I do love its sharing features)? That iOS users have sent more than 450 billion iMessages? That we’ve collectively received more than four trillion notifications?

Now you’ll have to excuse me as I need to update my other iOS devices – the iPhone took priority.

Glenn Dasch is an Apple enthusiast, who shies away from the fanboy label. Still, he is always on his toes when it comes to Apple news and updates, and relies on CLEAR internet for reliable and fast connections.