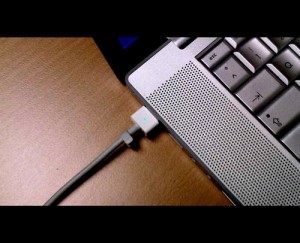 Apple’s 30-pin connector has been a staple in the company’s many mobile devices. Its universality across all of its mobile products means that you can just bring just one cable to connect your iPad, iPod or iPhone to the charger or to a PC or your Mac. It’s definitely a great convenience.

But a newly discovered patent filed by Apple may mean that the company may just eschew the 30-pin connector with a totally brand new connector that will be similar to the Magsafe adapters the company introduced in 2006 for use with the Macbook Pro. The Magsafe adapter is a well thought out innovation. It easily pops out of the Macbook in the event someone tripped on the cord. I’m pretty sure the Magsafe has helped save a countless number of Macbooks from dropping on to the floor.  The usefulness of the Magsafe adapter may be the primary reason Apple plans to abandon the 30-pin connector and use the technology for its mobile devices as well. The same patent also indicates that Apple is planning to use a similar technology and apply it to the headphone port.

The new patent indicates that Apple wants to use coded magnets that will be placed on both the device and the adapter. These magnets will help facilitate data transfer. With magnets, Apple will effectively solve one problem with the 30-pin connectors, its susceptibility to water damage and the common mistake of people trying to jam the connector into the device and eventually discovering the connector is not properly oriented (it’s backwards). The same plan with the headphone port will mean the device will be better sealed but this will also mean new headphones and connectors, which will definitely not be appreciated by third party accessories manufacturers.

There’s still no timeline on when Apple plans to implement this, or if it will actually push through with it. But the patent was filed in July 2011 so if does plan to change the connectors it will probably happen in about a couple of years.