Check out the best seven noise generator apps and white noise apps for your iPhone and iPad. These apps can help you improve your focus, sleep better, reduce anxiety, and enhance meditation. 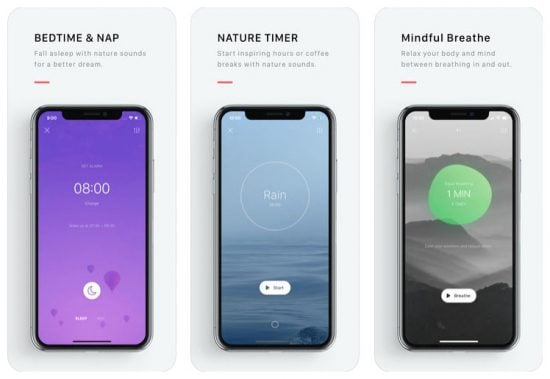 Tide is a little different from the other apps on our list. Rather than simply having a basic palette of noises like “White Noise” and “Oscillating Fan,” Tide has “scenes,” pre-mixed combinations of multiple noises as a single noise track. For example, the app’s “café” sound includes some walking noises, some quiet machinery noises, conversational ambience, disk clicking noises, and some subtle traffic sounds. Unlike other apps, you can’t change the mix or relative volumes. But also unlike other apps, these scenes make for enjoyable listening. None of the scenes included the all-too-common mistakes of other noise generator apps, and I never found myself wishing for greater control over the mix. They were clearly crafted by a human that cared about doing the best possible job. That attention to detail alone launches the app to the top of our list.

Tide’s interface is also clearly modern, setting it further apart from most other utilitarian-looking noise generation apps. It might look like a checklist of design trends, but this exists alongside a collection of intelligent user experience choices. For example, when using the “Focus” mode, sessions are automatically set to be 25 minutes log, Pomodoro-style. In “Sleep” mode, sessions can sync with your iPhone’s Health data. Tide can also silence the audio once the it realizes you’ve fallen asleep, making excellent use of Apple’s all-too-frequently-ignored HealthKit API. You can end your sleep session with smart easy-wake alarm tones, and the noise tracks can keep playing behind your music or podcasts.

There’s clear investment by the developer here, and excellent understanding of the smallest desires and frustrations of people that use noise generator apps on a regular basis. It’s touches like these that elevate Tide so significantly among the other less-carefully created noise generator apps. This praise might seem a little gushing for an app that does something so simple, but little touches like these make using the app actively enjoyable, supporting the soothing effects of noise generation. The app is free in the app store, but it would be worth a significant price tag as well. 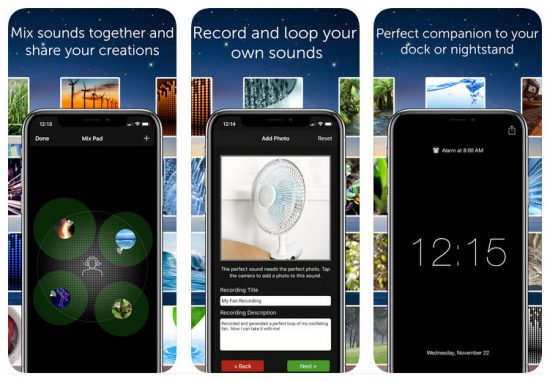 On the other end of the design choices spectrum, we have White Noise. This utilitarian app is a collection of 40 high-quality noise tracks you can manually mix and match into your own custom scenes. These scenes can be balanced through relative volume and position in the stereo soundstage. In addition to the expected mixing features and app’s default selection of noise tracks, the app’s noise marketplace (accessible through a separate app, for some reason) opens up the floodgates.

There are hundreds of user-generated noise tracks in the marketplace. All of them can be freely downloaded and mixed with other tracks in the White Noise app. As is always the case with user-generated core content, the quality is highly variable. It’s also characterized by a clear set of “gems,” which you can find in the White Noise Market by looking at user recommendations and comments. If you want simple noise generation tools and a basic selection of options and good mixing tools, this is your best choice. It’s only enhanced by the marketplace expansion sounds. 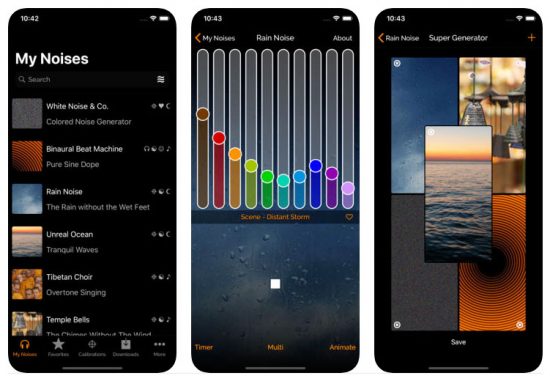 myNoise looks like a lot of the other noise generator apps at first, but it has a unique feature that makes it much more useful. As is standard, you get a noise and scene library that includes a few of the greatest hits of noise generation—white noise, zen melodies, rain—as well as the ability to layer multiple sounds and save these scenes for later playback. Uniquely, you can precisely control the frequency spectrum of the track as it is played back. This is achieved by a ten-band equalizer that processes whatever files are currently playing back. You can adjust this manually, hearing the result in real-time, then save the equalization curve for later application.

More interestingly, you can generate and apply EQ tailored to your perception of frequencies and the quality of the ambient noise. With interactive tools, you can create a custom curve created by adjusting frequency ranges to be equally as loud in response to your personalized perceptions. Additionally, you can create an EQ curve designed specifically to cover up the present ambient noise, with its own unique frequency spectrum. These calibrations can be saved and recalled later while playing most sounds. It makes the basic library of sounds far more useful, allowing you to create other colors of noise from the basic white noise file by applying differing EQ curves.

There are other noise generation apps out there that we like as well. Relax Meditation has a huge library of sounds that can be blended into scenes, but the interface also prioritizes guided meditations that a sound-only user needs to regularly circumvent. TaoMix 2 has a unique sound oscillation concept that tweaks the relative volumes of sounds over an repeating period, but the randomization makes it hard to build listenable or effective soundscapes. Noizio has an attractive user interface, but comes with a limited library of noise tracks, even when considering the pathetically spare library of paid sound effects.