Blackberry gets into the App Store game too… 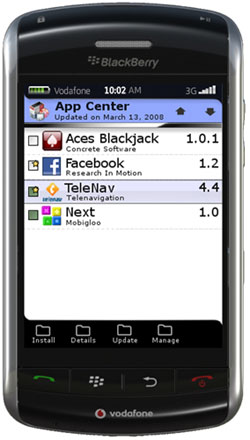 This service is going to be similar to Apple’s App Store, but the choices of the store will be dictated by the carriers rather than RIM itself. They will host the content but will use a central RIM server as a filter. This is going to allow carriers to limit access to software that they feel would consume too much bandwidth or that they think run against their policies.

So, for the record, we have 3 major App Stores for 3 different platforms – and each of them is handling things differently.

iPhone – Apple is controlling what Apps can and can’t come through their store, making some people upset about the “closed” nature of the platform.

Blackberry Storm – RIM is starting up an App Center that they’re handing control of over to the carriers – so developers may find their Apps only available for certain carriers, or rejected all together at the discretion of each individual carrier that the phones appear on.

Android – Google’s App Store claims to be completely “open” but we’re already hearing that they may not allow applications that tether the phone to a laptop. (according to Will Harris on this week’s TWiT) Google’s “open” model should allow all comers to develop for the platform, but carrier T-Mobile is already planning to charge developers for Apps that use more than 15 Mbs of bandwidth a month.