You are here: Home / Feature / 5 New Features in OS X Yosemite that Will Help You Be More Productive 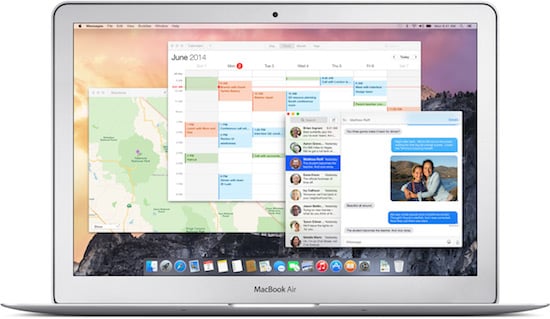 When Apple released the first “gold master” candidate of OS X Yosemite to developers earlier this week, it was an indication that the next version of the Mac operating system is nearly ready for release. The update is expected to come later this month, bringing a host of new features and performance enhancements along with it.

In addition to delivering a revamped user interface, as well as a suite of updated apps, Yosemite will allow Mac users to interact with their computers, and other devices, like never before.  Here are five new features in Yosemite that are sure to make your life easier and more productive.

Perhaps the most exciting new feature coming our way  in OS X Yosemite is Handoff, which allows you to start working on a task on your iPhone or iPad, and then complete the work on your Mac – or vice versa. This would allow you, for instance, to start writing an email on one device, and then have the ability to jump over to another to finish the message before sending it.

Both Yosemite and iOS 8 automatically recognize when you’re working in an app that is Handoff compatible, and will give you the option to resume your work in that app, right where you left off. In addition to working with Mail, Handoff is also compatible with Pages, Keynote, Numbers, Maps, Safari, Messages and more. Better yet, the service is open for developers to add to their software as well, which means we should see it implemented in more apps over time.

Continuity is another set of system tools that allow the Mac, iPhone, and iPad to work together more seamlessly. This feature gives those devices the ability to share information and functionality in ways that simply weren’t possible before. For instance, Continuity will give Macs – working in tandem with an iPhone – the ability to both make and answer phone calls. This becomes especially useful when paired with a new feature in Safari that gives users the option to dial a phone number listed on a website simply by clicking on it.

Continuity also allows the updated Messages app to send and receive SMS text messages for the first time, making it easier than ever to chat with friends and family who aren’t using an Apple device. Other new features include Instant Hotspot, which will make tethering to your iPhone or iPad’s data connection a breeze, and the ability to use Airdrop to quickly and easily share files between OS X and iOS. iCloud has been around for several years now, but until recently, it has mostly just worked in the background, storing calendar and contact information, app data, and iOS backups. Now, Apple is giving users the ability to store Word documents, pdf files, photos, or any other kind of file on their iCloud drives, making them accessible across all of their devices.

Like other cloud storage platforms, iCloud will allow users to create folders, and organize their documents as they see fit. They’ll even be able to add tags to those files, making it easier to search through them as well. Updated versions of Pages, Keynote, and Numbers will have built in iCloud Drive support, and since those apps now come preinstalled on all of Apple’s devices, you’ll be able to quickly and easily edit your documents while on the go.

Any files stored on iCloud Drive will also be available directly from the iCloud web portal too, providing a greater level of access to your important documents. All iCloud users will continue to receive 5GB of free storage space, but if you find that isn’t enough,  Apple has also announced affordable pricing for increased levels of storage as well. The Notification Center was introduced last year in OS X Mavericks, and while it provided some useful functionality, many users founded it to be generally lacking. Apple heard those complaints, and has significantly revamped this feature in Yosemite. Much like iOS 8, the new Notification Center now has a “Today” view, which puts all of your appointments, events, and reminders in a single spot that can be accessed at a glance.

It also provides weather updates and stock info as well, and has the ability to integrate widgets, greatly extending the functionality even further. After the release of Yosemite, new widget apps will begin showing up on the Mac App Store, allowing users to customize exactly what information is shown in their personal Notification Centers. Lets face it, email is an important part of our lives, both at work and at home. Apple continue to improve its Mail app under OS X Yosemite, adding new features that will certainly aid in productivity. For instance, you’ll now have the ability to send much larger attachments than ever before thanks to a feature called Mail Drop. Working with iCloud, Mail Drop circumvents the attachment size limitations that are set by Internet service providers, allowing us to send files that are up to 5GB in size.

Another new feature called Mark Up gives users the ability to edit or comment on email attachments without ever exiting Mail or opening them in another program. It even allows you to insert your signature on a doc using your multi-touch trackpad or the camera on your Mac.

These are just a few of the numerous new features that Yosemite will be deliver to the Mac very soon. As of now, the release date for the OS update is unknown, although most speculate that it will come around October 21, when Apple’s next big event is rumored to take place. In the meantime, you can learn more about Yosemite at Apple’s preview page.