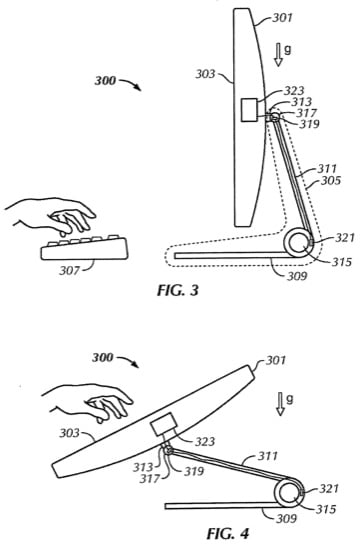 The world of Apple patents can be a tricky thing. Apple puts out tons of patent applications every year, and there’s never any “sure thing” that it’s going to happen. This one though, is pretty interesting.

This comes from MacRumors, and it goes like this: Take your typical iMac and make it a touchscreen. Then make it pivot and tilt so that you can type and touch the screen itself. Here’s the skinny from the site:

Meaning that the display changes when the screen is tilted. So what does this mean for us?

First, the theory is that this is one way to integrate iOS 4 – or some newer variation – into the OSX lineup. This could potentially make for a very simple to use computer. Alternatively, it could also be to integrate full touchscreen abilities into OSX, also making for easy use.

Is it the way to go? I’m not so sure I dig it, but I’m a big fan of my traditional setup. Who knows though, some day this may be on desktops across America.