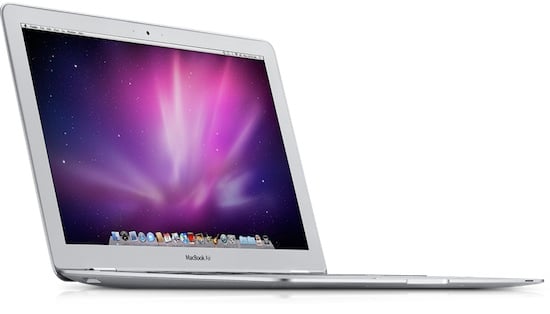 Oh, the MacBook Air. It’s thin and … well there’s not much else to say really. It doesn’t have an optical drive, only comes with 2GB of RAM that isn’t anÂ upgradableÂ option via Apple, and it’s $300 more than the base model 13-inch MacBook Pro which is faster and has more hard drive space. In other words, it’s a bit of a tough sell.

But the rumor now is that a new MacBook Air is coming out soon. Via Apple Insider:

Exclusive: Supplies of Apple’s MacBook Air have dried up throughout the company’s indirect sales channels, fueling rumors that a significant makeover to the lightweight notebooks is fast approaching.

For example, all but one of the Apple Authorized Resellers thatÂ AppleInsider tracks as part of itsÂ Mac Price Guide have run out of low-end 1.83GHz MacBook Air, includingÂ Amazon.com,Â MacConnection,Â MacMall andÂ J&R. In addition, at least two of those resellers are also reflecting no stock of the high-end 2.13GHz configuration.

This marks the first time thatÂ AppleInsider has witnessed this abnormal trend in regards to the Air since it began tracking availability of Apple’s Mac line on a daily basis over two years ago. Still, the drought didn’t manifest over night. For weeks now, the websites of certain resellers have indicated that inventory of the low-end MacBook Air was on the verge of depletion, urging shoppers to “order soon,” as only a handful of units remained in stock.

What’s more, people familiar with the buy side of operations for big box retailers like Best Buy and Amazon.com say that Apple has indicted to them that it will not replenish supply of the notebooks until Oct. 12 through Oct. 16 at the earliest. Such expansive delays on low volume products like the MacBook Air are common only when Mac maker is preparing to overhaul the product line, these people say.

Well that all seems logical to me. I’d really like to see something a touch smaller with more power, but who knows what’s going to happen in the next few days. Here’s to hoping.