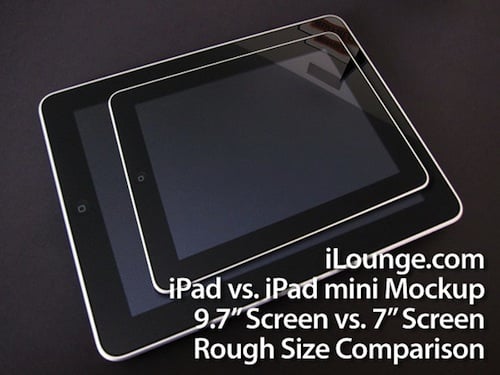 Want a 7-inch iPad? I wouldn’t hold your breath. Turns out that Steve isn’t a huge fan of the concept, at least according to what he said on yesterday’s Q4 call. Here’s the quote from MacRumors:

Commenting on avalanche of tablets heading to market. Just a handful of credible entrants. Almost all use 7″ screen, compared to iPad at nearly 10″ screen. 7″ screen is only 45% as large as iPad’s screen. Hold an iPad in portrait view and draw a horizontal line halfway down. What’s left is a 7″ screen…too small. There are clear limits to how close elements can be on the screen before users can’t touch accurately. We believe 10-inch screen is minimum necessary.

But that’s not all. Here’s what Cult of Mac wrote:

Jobs said the wave of tablets hitting the market are no threat to the iPad: â€œLetâ€™s talk about the avalanche of tablets; first, there are only a few credible competitors, and they all have seven-inch screens. This size isnâ€™t sufficient to create great tablet appsâ€¦weâ€™ve done extensive testing, and 10 inches is the minimum tablet size.

â€œThe proof of this will be in our competitors pricing, and thatâ€™s why we think the current crop of seven-inch tablets will be DOA. Sounds like lots of fun ahead.â€

Of course, I’m not particularly surprised by this, because I called bullshit on it a few weeks ago. I don’t think that the iPad is the perfect tablet, but I do think that so far, it’s the example others need to follow. Everybody wants things smaller, but Jobs is right, the 7-inch form factor is too small. But more importantly, Apple is already working on V2 of the iPad, while all of their competitors are working on betas. Who knows when these things will actually hit the market, and when they do, Apple will still be ahead of the game. I think eventually they will catch up, but it’s not going to be with a 7-inch version running Windows 7.