Make & Sell Your Own iOS Games with Sketch Nation...

Hitting the app store this Wednesday (4.18.12) is a clever new app that puts the tools in your hands to create and sell your own iOS games — right from your iPhone or iPad.

It’s called Sketch Nation Studio, and it is quite possibly the first ever app that gives you the game engine, the tools, and the ability to create your own games, and then sell them in the App Store. And when I say “gives,” I mean that literally: it’s a free download. 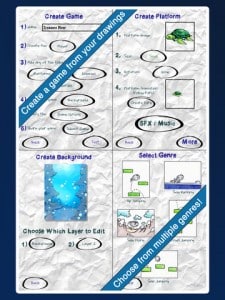 It’s stunningly simple to use and requires no knowledge whatsoever of how to write code. It does, however, require some artistic ability, because it’s built around a mechanic where you’re meant to draw all of the objects that will be used in your game. Engineous Games, the developer behind Sketch Nation Studio, imagines that most users will draw in-game objects by hand — either on their iPads or on paper, which can then be scanned into the game using your iDevice’s camera — but I see no reason why enterprising creatives couldn’t import more professional imagery into the game. Even CG renders and the like should be possible, provided they’re your own, proprietary creation.

Once you’ve created your objects, you then use the numerous settings to customize how the game behaves. Sketch Nation takes it from there, and suddenly you’ve got yourself your very own game, which you can play yourself or share with others. A built-in social network facilitates this sharing. You can also upload just the art you’ve created (under an open creative license), and allow other Sketch Nation Studio game makers to use them. Whenever you play a SNS game, and anytime someone downloads your game from the in-app social network, you earn virtual currency, which you can spend to download other games and art. 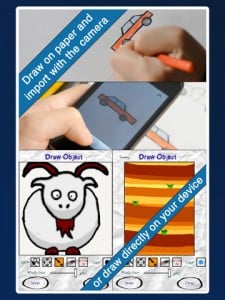 You can pick from several different game genres, such as platformers or puzzle games, and Engineous Games claims that their app can handle them all. And genres that aren’t yet available are promised for future updates.

Of course, all this free stuff comes with one catch. Not every game built using SNS will be released as a standalone game app in the App Store. But really, would we want them to be? There will no doubt be plenty of half-hearted stinkers (and I think we’d all agree that the App Store already has more than enough crapware as it is), so only the most outstanding and creative games deserve the honor of becoming full-fledged App Store apps. The apps that truly shine, the ones that push the software in new and different directions, will earn the stamp of approval and be published and advertised by Engineous Games, and they’ll split the profits with you. Apple gets 30% of all app sales, so you and Engineous would get 35% each. (Meaning you’d get about $.35 of every sale if your game was priced at $.99.) 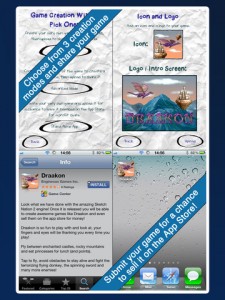 Just last week, we learned that Apple is definitely working on an app-making program of their own. But one of their third-party developers have beat them to the punch, at least in part. Sure, the options in Sketch Nation Studio are a lot more limited than what Apple will offer, and it’s exclusively designed for making games, but it’s also going to be a heck of a lot easier to use. And you can even do all the work right on your iPhone or iPad. All indications are that Engineous has been working on creating and fine-tuning this thing for quite a long time, and time will tell whether or not it was worth the effort.

But you have to admit… It’s pretty cool.