Buying Wal-Mart DRM-Free MP3s on your Mac – A Review

So, today Wal-Mart announced a couple of shockers.

1) They are selling MP3s – completely DRM-Free – from both EMI and Universal Music.

So, these higher quality, cheaper songs, will play on any player, including your iPod – so dear Mac User – what’s to keep you from downloading them? Nothing, right?

Oh wait…their HAD to be a catch for us, didn’t there? I mean, SOMETHING had to make this a Microsoft only deal right? 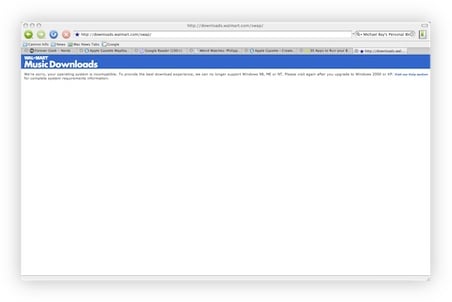 The store – of course – only works in Internet Explorer.

So if you’re not running a virtualization program or boot camp, then you’re out of luck. Since I’m running Vista in Parallels, I thought I would give it a try and see how it worked. 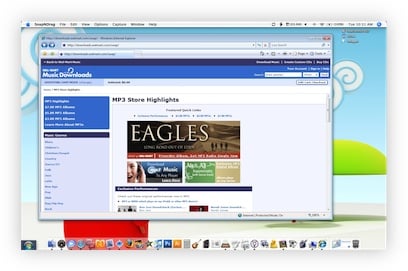 Everything ran smoothly once I fired up Fusion and got into IE 7. The reason that you have to use IE is because of the DRMed tracks still in the store. A Windows-only Wal-Mart Download manager application is required to download your tracks after you purchase them.

I navigated through the DRM free tracks and found a small collection of 5 songs for $3.88 that I decided to purchase from a group I haven’t listened to in years called DC Talk. After selecting the album I wanted to purchase, I had to install the Wal-Mart Downloads manager…all of that went smoothly and without issue. 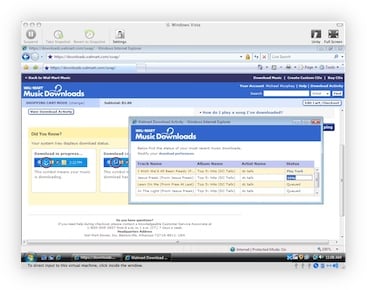 The music, however, took quite a while to download. I will assume that’s because this launched today, and it probably pretty busy right now…but you never know.

After the download completed, I grabbed the folder with the songs in it, dragged them to my iTunes folder in OS X, and they were imported into iTunes and ready to go.

They are now on my iPhone.

All in all – the process couldn’t have gone smoother. I don’t like Wal-Mart…but if you’re looking to save some money on your DRM free tracks, and get them at a higher bit rate – this is very easy for you to do if you have XP or Vista running in Parallels or Fusion.

Wal-Mart has thrown the hammer down. Apple needs to step up. $1.29 for the DRM Free EMI tracks suddenly seems very expensive.