Magazines Still Failing Even On The iPad

by Tanner Godarzi 11 years ago2 months ago
1 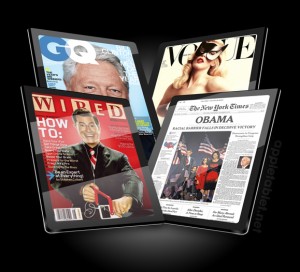 The iPad was thought by many publishers to be the one device that would save them from falling sales and loss of interest. According to the Audit Bureau of Circulations, average digital issue purchases have fallen in recent months.

When the iPad first debuted, publishers were thrilled about the possibilities that lay in the device and collectively the tablet form factor. Magazines could become interactive and incorporate media that was impossible to put in to paper form such as audio, video and robust photo galleries. Wired was one of the first magazines that came to the iPad and garnered 100,000 of download its inaugural digital issue on the device. Since then, average monthly downloads have fallen to 31,000 according to the Audit Bureau of Circulations. Vanity Fair and GQ haven’t fared much better with both falling to 8,700 and 11,000 downloads per month respectively.

The fundamental problem with digital magazines is just that â€” the digitization of print. While there are interactive features tacked on to digital issues, the idea of waiting a month for content that is instantly available on the web isn’t very appealing. A bigger turn off is the price. You’d think publishers would charge less per issue as it wouldn’t need to be printed but it’s actually cheaper to purchase an annual subscription to Wired than buy each digital issue.

Losing sales on the iPad is an issue (no pun intended unless you’re reading Business Week) publishers will need to contend with. Mo they delivery cycles are two issues that need to be tackled.