Learning from Apple’s advertising landmarks in the 80’s

I came across some scans of some of Apple’s advertising material for print. Though from the 80’s they clearly define an emerging Apple trying to break free from the conventional ways of doing things, clearly defining their ‘Think Different’ campaign. Personally, I do find Apple circa 1980’s to have been a more interesting one as the challenges were definitely different, of having the need to prove to the world that they were indeed the better choice.

So this isn’t about the famous “1984” superbowl commercial. It’s about a print ad campaign done in the fall edition of Newsweek, where Apple Computers bought all the ad space. This particular issue was special as it commemorated the re-election of Reagan. Perhaps a premonition to the 1997 “Think Different” campaign featuring icons who changed the world? 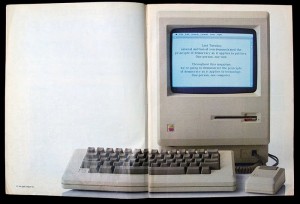 A complete buy-out of the ad spaces was rather strategic, done especially for a commemorative issue that was sure to be sold out. Yes back then magazines did have an enormous reach for the “can afford” and it made perfect sense for Apple to do this. But the ad space alone alone wouldn’t be strategic.

If you check out the ads in higher resolution. 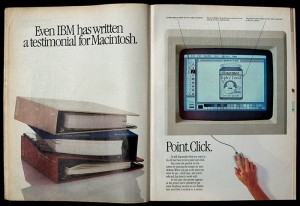 The ads really told the story of the Macintosh making it so enticing to buy one, you could have wanted to buy the Newsweek issue for the Apple ads rather than Reagan. And it precisely sticks to the overall spirit of how Apple did things, to some point even to today. Minimalist approach. Careful use of typeface. Demos. Yes, Apple has always been big on demos. 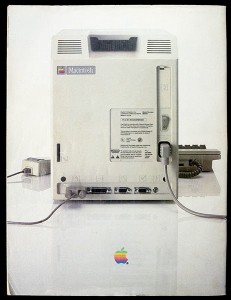 What Apple did was put the readers through an entire product demo by making the ads really stand out compared to the editorial articles themselves. And then balance it all out with “wordy” descriptions of what the Macintosh could really do.

If you look carefully through the pages, the reader is taken through a visual treat: introducing the Macintosh, showing the value proposition (such as the mouse), showing you what it can do based on tasks you want to accomplish at home — and then do it by showing the printed output. Lastly it does something that even products today don’t normally do — show the back of the computer.

Reading through each scan brings you back to a time of a more interesting Apple, where they were at the pinnacle of innovation not just in products but in how they presented these to the public eye.