Harry Potter and the iBooks Snub?

by Robin Parrish 11 years ago10 months ago
3 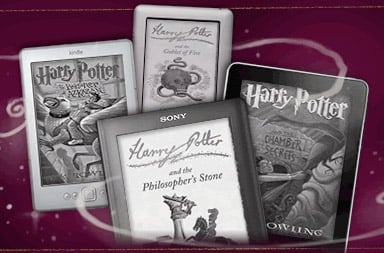 In case you haven’t heard, all seven Harry Potter novels were released today as ebooks, for the first time ever. At first blush, it looks as though all of the ebook retailers are selling the Potter ebooks — except for iBooks. But take a closer look: who’s snubbing who?

Make no mistake — this is a big deal in the publishing world. For the first time ever, a bestselling author is bucking the established system by retaining the rights to her ebooks instead of selling them through a major e-retailer like Amazon. You can’t buy the Harry Potter ebooks at Amazon, iBooks, or anywhere other than J.K. Rowling’s Pottermore Shop, where they’re being sold for between $7.99 and $9.99, or $57.54 for a collection of all seven. The ebooks are available in formats compatible with all the major ebook readers and apps, which you simply buy from Pottermore and then import to your Kindle, Nook, Google Play, iBooks, or what have you.

As an author myself, I’m fascinated by this, because we writers with ebooks have been playing in Amazon’s sandbox for a while now, with no other options available for reaching huge numbers of readers. And I’m not alone. The publishing industry has been buzzing over this for a while, because it’s being seen as a test case, a way of determining if retailers like Amazon and Barnes & Noble with their DRM book files and/or proprietary ebook file formats can be ignored in favor of a better way of reaching consumers. And heck, if any author in the world can succeed at thumbing her nose at the big e-guys, it’s Jo Rowling.

But the story thickens when you visit Amazon.com and BarnesandNoble.com, and see that because she’s the most successful modern author there is, her people were able to collaborate with Amazon, Sony, Barnes & Noble, and Google to have her ebooks listed on their sites — but clicking on a “buy” link will direct you straight to the corresponding product page on Pottermore.com. That’s unprecedented. Online retailers are not in the habit of linking away from their websites; it’s their job to keep you clicking on links to other pages on their own website. Futurebook reports that these online retailers are likely getting some cut of Pottermore’s sales for their trouble (and I could write a whole other article on the glorious irony of J.K. Rowling getting major ebook retailers to sign up for her very own “referral program”), but still.

Noticeably absent from this band of merry helping hand retailers, gleefully sending their customers to another website to buy products, is Apple’s iBooks. The conclusion we’re forced to draw from this is that Rowling’s people and Apple weren’t able to come to a similar agreement. In other words, homey (Apple) don’t play that. Apple wasn’t down with sending their customers over to Pottermore, even for a cut of the profits — it’s not like they need the money — so iBooks is not advertising the Harry Potter ebooks like its contemporaries.

Did Rowling’s people shut the door in the face of Apple’s unwillingness to budge on their terms & conditions? Or did Apple give Rowling a big, “Thanks, but no thanks” when presented with the Pottermore sales plan? Whatever went on behind closed doors, we’ll probably never know.

But I predict there will be lots of knee-jerk fans who don’t take the time to look closer, who will assume that J.K. Rowling is intentionally snubbing Apple, or vice versa, because it looks like the Potter ebooks are being sold everywhere but iBooks.