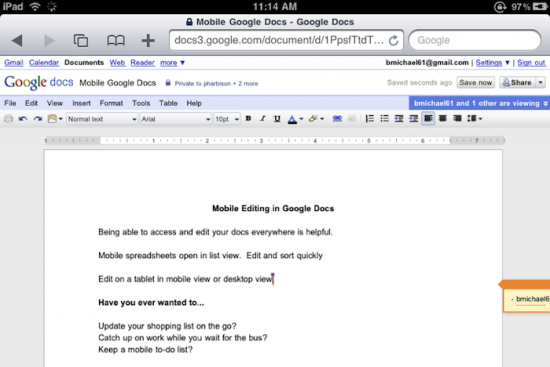 Since the iPhone’s release, Google Docs hasn’t worked properly in Mobile Safari. Google has introduced tweaks and improvements over the years to make editing compatibile with iOS devices. After introducing a mobile version of Google Docs for the iPad, the desktop version is now iPad friendly.

Google officially announced that the desktop version of Google Docs is now iPad friendly. Previously, editing documents and spreadsheets wasn’t available on iOS devices. Google made progress by announcing a revamped mobile version but now the full desktop version is compatible with Safari on the iPad.

“The new mobile editor is fast and lightweight, but sometimes you want to make more style edits like changing a font, or center aligning a paragraph. If you’re on an iPad, you can do that by visiting the Desktop version of the document editor.”

However, it’s important to note that not all the desktop features of Google are usable on the iPad. It’s still progress on Google’s part and having expanded access to Google Docs on the iPad is still better than nothing.