A new Kickstarter campaign called Crono is making a bold claim: it wants to revolutionize your Inbox and make it easier, faster, and more intuitive to use. I’m sold.

Once upon a time, I was good at keeping up with email. Then I became a blogger, and a published novelist, and now I receive hundreds of emails every day. Some of them are important. Some, less so. There are gazillions of press releases, several personal inquiries, and lots of stuff that falls somewhere in between. And it’s just too much. I’m trying to hold back the flood with my finger in the dike — only the dike broke a long time ago.

At the time of this writing, there are 2,419 messages in my Inbox marked as “Unread.” Email isn’t fun anymore. It’s a time-hogging, soul-sucking chore. For the love of all that’s good and holy, something has to be done. 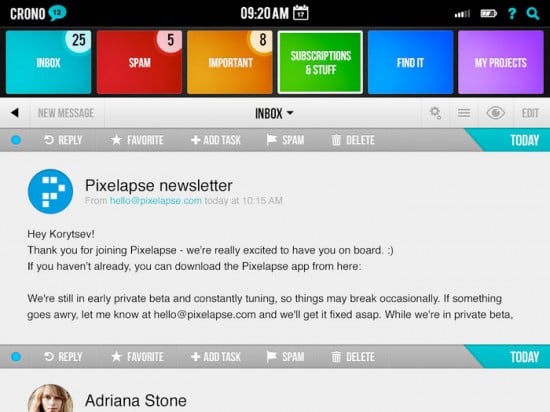 Crono looks like the beautiful, intelligent email app Apple should have come up with. It’s sleek, stylish, smooth, and simple. Watch the video above if you don’t believe me. Go ahead, I’ll wait. It’s part Inbox, part task manager, part social media interface. And it’s all about changing the entire email experience (which sounds like nirvana to me).

You can keep multiple user accounts in Crono, each one password-protected. Meaning you can share an iPad with your family, but no one can read your email but you. It’s got sophisticated sorting algorithms so it can figure out on its own which emails are the most relevant to you, and place them in higher-priority folders. Crono is even smart enough to observe your behaviors and learn to automate them for you. Like that mailing list you subscribe to whose messages you don’t want to delete, but you need to save them somewhere for reading later. Drag them over to the appropriate folder, and pretty soon Crono will start doing that for you as soon as the emails arrive.

You can search through your Inbox, you can turn any email into a task, and much more. It’s built with the iPad’s interface in mind, so you’ll get page turns, pinch-to-zoom, and all the niceties.

Crono is asking for just $40,000, which is a very reasonable goal for a Kickstarter campaign. Please. I beg you. My Inbox begs you. Support this campaign. Do it for my sanity. Or, you know, for the children. Or something. We have to make this thing happen, people!