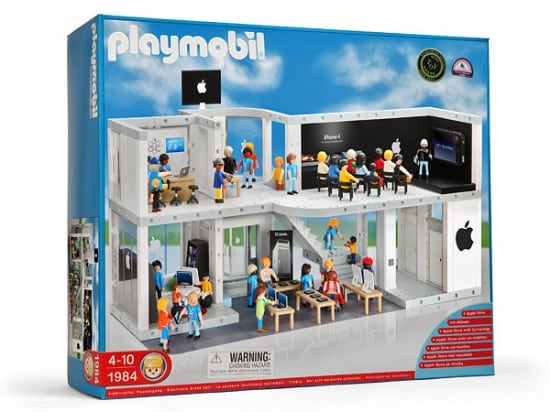 Today, Apple celebrates its 35th birthday while the Internet floods with pranks, fake products and fun news. As the crew at Apple enjoys its 35th year of creating amazing products, the clever team at Think Geek has unveiled its own April Fools related Apple Gag: The Playmobile Apple Store.

While not as popular as Lego, the Playmobil version of the popular Apple Store is still amazing and could pass as a real product to unsuspecting parents. The store includes a keynote Theater, Genius Bar, Kid’s Corner and display tables decked out with iPhones and iMacs. The fake set retails for $179.99 and can be ‘upgraded’ with an optional line pack for $49.99 to create your own Apple product launch:

So when we spotted this amazing Apple Store Playset from PLAYMOBILâ„¢ we were admittedly in a bit of a conundrum. On the one hand, it’s a product designed for children much younger than ourselves. On the other hand, it’s a tiny representation of the store which sells us all the shiny Apple goodies we can’t resist. Then we noticed that the PLAYMOBILâ„¢ iStore includes amazingly tiny iPhones, Macbooks, and iPads. Our resolve began to waver. A quick peek at the miniature Genius Bar and we were feeling a bit woozy. Then we saw the tiny Steve Jobs presenting in the Keynote Theater on the top floor and that was it. Our wallets popped out faster than you can say Jonathan Ive and we plunked down whatever money was needed to own this amazing playset.