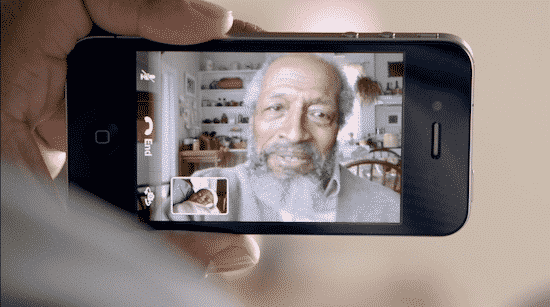 Well, it’s official, FaceTime is the big deal for the iPhone 4. Yesterday, Apple released four new ads for the iPhone 4, and they’re all aimed at the heartstrings in one way or another. Even I, the guy who doesn’t cry, got a bit choked up at two of them. OK, that’s not really accurate. I’m a giant wuss when it comes to emotional ads and movies, so it’s not exactly shocking that I got an emotional response.

These commercials are interesting for a few reasons. I first noticed a lack of background music, something which all Apple ads – including the first FaceTime ad – have rolling in the background. I’m no marketing expert, but I imagine the theory here is to really put the impact of the message front and center. It works, too, because you’re forced to listen to what the people are saying and the message being delivered. It’s also interesting that FaceTime is the only real feature being shown. I can’t say I’m surprised, but there’s no talk about the great apps, the excellent rear camera, or the screen. I suppose you could make the argument that all of those things are being shown through FaceTime, but it is an interesting perspective.

This does cement my previous statement:

As Gruber pontificated, whatâ€™s next? The iPod Touch is a gimmie, and hopefully, so is integrating the technology into iChat. After that though, Apple could put FaceTime into anything else they wanted to. The iPod Nano has a camera already, and although it doesnâ€™t make much sense to add Wi-Fi to the equation, maybe thatâ€™s one possible direction to go in.

Regardless, FaceTime is a step towards independence from cellular phone carriers, and a huge step forward for Apple. It may not be seen that way today, necessarily, but I think in a few years weâ€™ll look back and see that the day the iPhone 4 way introduced was the day the game was changed.