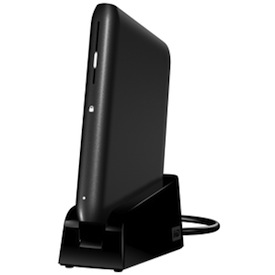 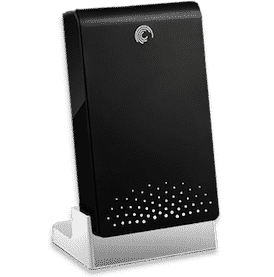 I’ve been working from two offices recently, which can be a bit of a chore. I’ve talked previously about how I’m essentially duplicating my home setup at the new office, but one thing hasn’t been duplicated: my backup system. At home, I’m currently using a 1TB Western Digital My Book to run my hourly Time Machine backups, but I have nothing to use at the office. Ultimately, this means that in a worse-case scenario – my hard drive blows up as I’m packing up to leave after a very productive day – I lose just one day of work. But that’s not really acceptable to me, particularly with this new gig. It means that I have to find a new way of doing things.

I have multiple portable USB drives, but none of them over 400GB, which is about what my MacBook has stored on it today. As a result, I need to buy something that can go with me wherever I go, but is also convenient. My goal with the office setup is to make it as plug and play as possible. To leave for the day, I unplug one USB cable that’s connected to a hub, one monitor adapter, one power adapter and a cat5 cable. This makes it as simple as possible for me to go between the two places.

Since I have to get a new USB drive anyways, I figured getting one with a dock would be a good way to go. That way, I can buy one extra dock and have one at home and one at the office. This means I could just pick up the drive and go, without worrying about anything. It also placates my OCD tendencies.

After doing some research, I found two: The Seagate FreeAgent Go, and the Western Digital My Passport Elite. Both have a second dock available, and they also have capacities above 500GB. Unfortunately, the WD drive is only 640, and I feel like I’d run up to that wall faster than the 1TB available with the Seagate. I’m not a huge fan of Seagate, but it may be my best option.