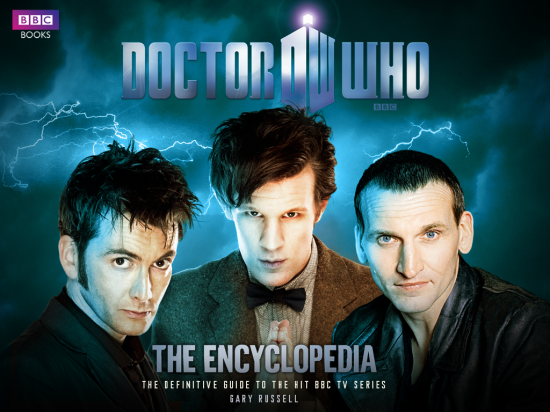 If you don’t watch Doctor Who, then you wouldn’t know. You wouldn’t know that the modern BBC revival is the coolest scifi show on TV. But it’s a vast, complex universe, and if you need to keep track of it all, the Doctor Who Encyclopedia app is the perfect companion. (So to speak.)

Taken from the Random House book of the same name, the Doctor Who Encyclopedia app is impeccably researched and written. Its exhaustive compilation of facts is extraordinarily well done. Perusing these entries brought back memories of favorite episodes, and helped clarify several things for me — such as River Song’s wibbly/wobbly timeline. Learn all about Amy Pond, Rory Williams, Canton Everett III, the Weeping Angels, the Silence, and countless other aspects of Doctor Who. 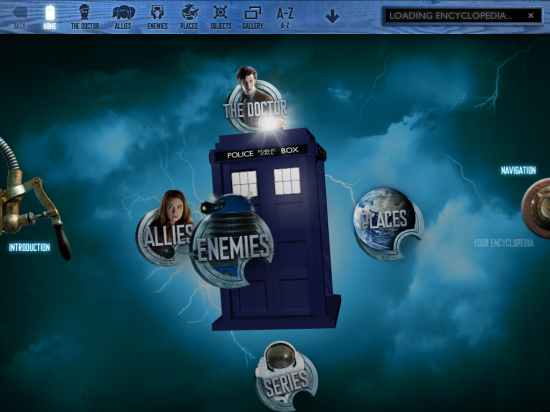 Made exclusively for iPad, takes full advantage of the device’s large screen to show off a gorgeous interface. Its touchscreen interactivity is brilliantly designed, showing that whoever came up with the interface counts themselves a fan of the show. This can easily be seen from the amount of thought and love poured into its creation. One of the nicer features, exclusive to the app, is that every entry comes with “connections” to other entries that directly relate to it. This kind of function is something a printed book simply can’t match, and I’m glad to see the app smartly taking advantage of it. 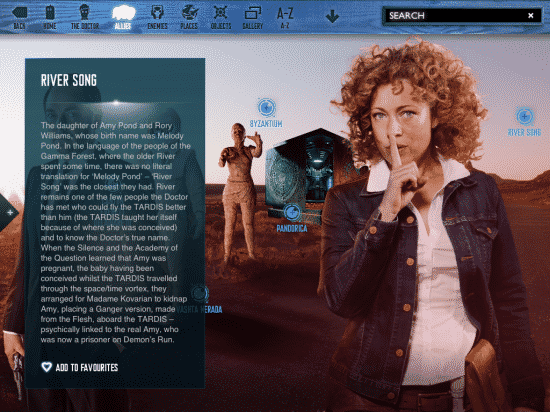 In addition to the Encyclopedic entries, there’s also a Gallery of photos from the show that you can swipe your way through. These images are very good ones, but I wouldn’t have minded a few video clips here and there. That said, entries pertaining to specific episodes are linked directly to those episodes on iTunes, where you can preview or buy them. 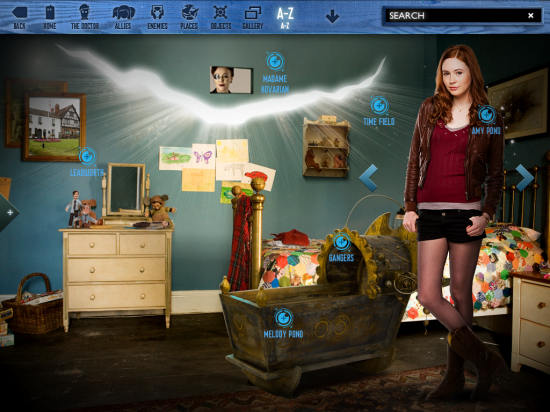 The listings are divided into categories: Allies, Enemies, Places, and Objects, with the Doctor getting a special hub all his own. There are a handful of these portal-like hub pages; Amy Pond gets one, as do the Daleks, the Cybermen, and a few other things. You can go through the thousands of entries via these categories, or a complete A-Z list that exhaustively lists every single piece of data available. You can also save your favorite entries to a special list, use a “random” function to go from one entry to the next, and search the Encyclopedia the way you would a search engine. 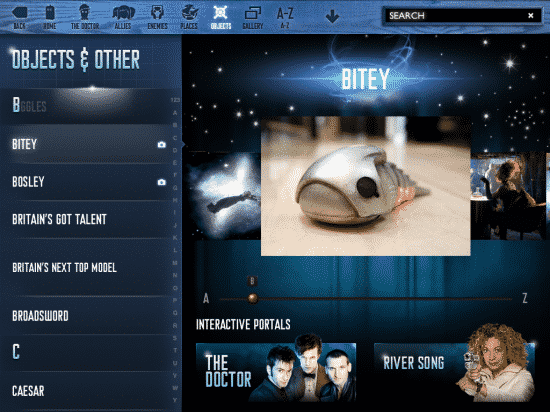 It should be noted that the Encyclopedia is designed only for the BBC revival series; there are no entries pertaining to the continuity that came before, aka Doctors 1 through 8. But this is a non-issue compared with the big gripe that most users have, which is the one and only fault I can find in the app. But it’s a big one: the app only comes with data related to the 11th Doctor, Matt Smith. You have to buy the entries pertaining to the 9th Doctor (Christopher Eccleston) and the 10th Doctor (David Tennant) in bundles, one for each Doctor. 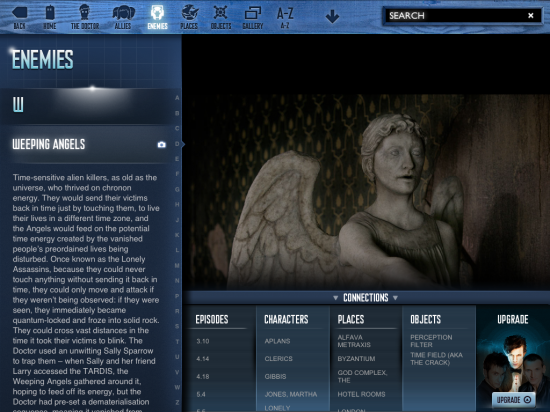 The most enticing bundle is obviously the Tennant one, due to his popularity, and since there’s got to be more material surrounding his run on the series than the others. (Tennant represents three seasons and a fourth year of specials, while Eccleston was only on for a single season. Smith has two years currently under his belt, with more to come.) Despite this, Tennant’s and Eccleston’s Encyclopedia bundles are priced the same, at $6.99. At the time of this writing, the core app costs $3.99. So if you want the entire Encyclopedia, that’s a whopping $18. That’s awfully expensive by mobile app standards. I’d be more willing to pay something like $9.99 up front for access to the entire Encyclopedia, instead of having to get it piecemeal, in pricey chunks. 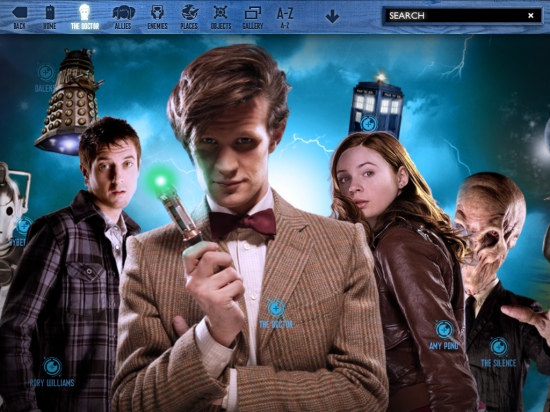 Regardless, the Doctor Who Encyclopedia is an absolute must-have for fans of the show. It’s beautiful, comprehensive, and it was clearly made by people who adore the show at least as much as the fans do. Its futuristic aesthetic and fun-to-manipulate navigation just look glorious on the iPad. But having to pay extra to unlock content from the 9th and 10th Doctors is an idea worthy of the Master.