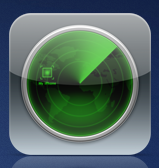 To say that I pay $99 a year for MobileMe is not an accurate statement. I paid $99 back in 2008 when I got my first iPhone, and since then I’ve been paying $69, mainly because I buy a new Apple product at least once a year which typically allows me to renew my contract for $30 cheaper. The only reason I’m not upgrading this year is because I upgraded when I bought my iPad, which puts me current until 2011.

Many people think that the service is a joke, so they don’t subscribe. After all, between Gmail, Dropbox and Flickr, you can have all the same features that you have on MobileMe, but for free. Well, all but one of them – the most important one in my case.

It’s called Find My iPhone, and Apple has just released a mobile version of the app for the iPhone and iPad [iTunes link]. This does beg the question, “Why would I want to find my iPhone if I’m holding it?” Well that’s obvious. You might not be looking for your phone.

For the uninitiated, Find My iPhone has been built into MobileMe for a while now. Just verify your ID, then a map will pull up with images of where your iPad or iPhone happens to be at that moment. It uses either Wi-Fi or GPS to triangulate your signal, then it places a dot on the map. Once it’s found the iPhone or iPad, you can either send a message to the device or remotely wipe it – handy if you’ve left it at a German bar, for example.

Most of the time, the location tracking is pretty specific. I pulled up mine just now and it pinpointed it down to the room in my house – pretty impressive, I think. If it doesn’t have a wi-fi signal or if you’re using a wi-fi only iPad, it’s not quite as specific, but it can give you the general location.

The app itself is free, but you do need a MobileMe subscription to use it. For me, it’s the reason I continue to subscribe to MobileMe. After all, you never know when you’re going to lose your iPhone or iPad.