You are here: Home / iPhone / Gizmodo, the iPhone 4th Gen, and Beer 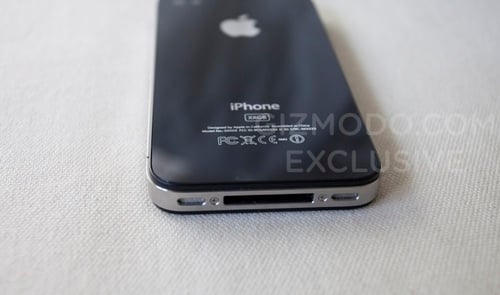 Well, as much as I hate talking about rumors, fact is, this is a mammoth story, and it needs to be addressed here on Apple Gazette. This is going to recap the saga that is the 4th-Gen iPhone, Engadget, Gizmodo, Apple, and everything in between. But before we can talk about what it is and why it’s so important, let’s first discuss how this all shook out.

On April 17, Engadget reported that they had been sent pics of the prototype iPhone. It had been left at a bar in San Jose, and the pictures were now being mailed to various tech outlets. It wasn’t said specifically, but at the time the owner of said pics may have been shopping for a price on the device, which was alluded to in the post:

There may be a chance to get some more face-time with the handset, but we wanted to get these photos to you guys ASAP. Stay tuned, we’re working on more details as we type — for now, enjoy the gallery below!

Well, Engadget didn’t get the device. But someone else did, and is rumored to have paid $10k for it. Gizmodo.

This topic has been pretty hot on the interwebs. So much so that Ken Sweet wondered about it aloud on Twitter:

I’m waiting for the backstory on @gizmodo‘sÂ #iphone exclusive. How was it lost/found? I think @nicknotned has said he’ll pay for exclusives.

Denton’s response was just part of the answer:

@kensweet Yes, we’re proud practitioners of checkbook journalism. Anything for the story!

So Gizmodo buys theÂ supposedÂ iPhone, then on April 19 – must have overnighted that thing – they posted up on the site with the title: “This is Apple’s Next iPhone.” Sounded arrogant to me, and frankly, like a load. So I decided to read it, determine that it was probably another hyped up thing to garner pageviews, and went on my way.

Except that I may have been wrong.

Yesterday, Gizmodo released the story on how they came to acquire the device, and how it came to be found in that bar in San Jose. A software engineer named Gray Powell went to The Gourmet Haus Staudt to enjoy a beer or two, and along with him came his prototype iPhone. As it turns out, Gray works for Apple and is responsible for developing iPhone Baseband Software, which is how the iPhone can make a phone call. He went to the bar, had a few, and left the iPhone on the stool. A drunk guy found it, handed it to a less inebriated gentleman, who decided to hang onto it and give it back to the owner. He flipped it on, looked through some apps and found the owner’s Facebook profile, and planned on calling him the next day.

Except that he didn’t. When he went to fire up the phone, it was now turned off – according to Gizmodo, probably via MobileMe – and now it was a useless piece of junk. So he decided to take off the case on the device and see what was doin. Turns out, it wasn’t an iPhone 3G like the case said, it was something different. That’s when things proceeded to go a bit differently.

We don’t know how it all broke down from there exactly, but we do know the end result: Gizmodo paid this guy to buy the iPhone from him, and then they published the results. What they found seems to be the next iPhone, and it’s pretty hard to deny that it’s at the bare minimum, a functioning prototype.

You could ignore all this of course, and just say it’s crap. That’s what I did. But then Gizmodo called Gray at Apple to get a response:

John Herrman: Is this Gray?

J: Hi, this is John Herrman from Gizmodo.com.

J: You work at Apple, right?

G: Um, I mean I can’t really talk too much right now.

J: I understand. We have a device, and we think that maybe you misplaced it at a bar, and we would like to give it back.

G: Yeah, I forwarded your email [asking him if it was his iPhone], someone should be contacting you.

G: Can I send this phone number along?

At this point, I don’t know how this isn’t the next iPhone, or at the bare minimum, a really close prototype. So now the question becomes, what happens from here?

From Apple’s standpoint, this is a big f-ing deal. An employee took an Apple prototype out into the wild, acted irresponsibly, then lost the device. Now the whole world knows what’s coming out sometime in June, and they have no big reveal. No iPad moment. No time to build up suspense about what the device is going to be and get customers lined up for hours to buy it. Instead, all the pomp and circumstance is taken out of the event, and people will walk into that conference center on June 22 with smug looks on their faces and tight-lipped smiles. No applause, no “one more thing,” nothing fancy.

This has got to be eating Steve alive.

There’s been speculation as well that this is a controlled leak, designed to stir up hype about the iPhone and get people in line to make a purchase. I disagree. Apple leaks things to reputable companies like the Wall Street Journal, and does so in a very controlled way. Look at the iPad, for example. At first, you could make the argument that there was nothing but leaks around the device, since everyone out there from CEOs to newspapers were talking about the Apple Tablet. But no one had the device in hand – at least not that we say prior to the big reveal – and no pictures were taken. Every single photoshopped image of the iPad was fraudulent, and just an educated guess as to what could be. It was a bit chaotic, but it drummed up hype for the iPad, which was Apple’s intent all along.

Were this a leak, I imagine it would’ve gone down a bit differently. There’s no way to tell that the person who found the phone would leak it to the press. It was only after Mister X got the case off of the phone that he discovered what it really was, and that’s all by chance. I don’t see it being possible that this was a controlled leak in any way, and fact is, we’ll never know for sure.

So what does Apple do? They sue the crap out of Gizmodo. They fire Gray. They lock down the building even more than before and maybe – just maybe – they delay the launch so they have time to redesign the device in some new way so that Gizmodo looks like an ass. I think it’s very likely that the first two will happen, if the ball isn’t rolling already. The rest is still unclear. We’ll just have to wait until June to show the world.

Gizmodo had better buckle down for a fight. When it comes down to brass tax, they purchased stolen property. Sure, Gray “lost” it, and that’s how they’ll defend it in court. But the mysterious person who found it should’ve returned it to him right away. Instead, he sold it to the highest bidder – and that’s a problem. If Gizmodo is a reputable organization, then they’ll claim that they can’t reveal their source and will hide behind the constitution. If they’re not, they’ll rat out their Mister X and he’ll go to jail, get fined, or sued himself. No matter what, Gizmodo is going to meet Apple’s legal team.

Of course, Apple could go another route with Gizmodo, as mentioned in the comments on their very post:

You guys better be prepared for the mighty God hammer that will fall after June’s unveiling. After that, it’s going to hurt, A LOT!

For 10k, the thief will lose a lot more than that defending himself in court. Gizmodo may be ban hammered for life from Apple events.

This is Not going to end well. The reason that Apple’s been quiet now is because they want plausible deniability that this is the next iPhone. Once it’s announced however, Jobs will unleash the hounds of war. All those who are responsible for this betrayal will be punished.

If Gizmodo is banned from Apple events, that could hurt their bottom line. Apple fanboys might leave the site because Gizmodo would have nothing to offer them. Of course, they would have lots of other things to post about – Apple isn’t everything, remember – but it could be a kick in the junk to them at the minimum.

But this story is developing quickly, too. Late last night, Gizmodo posted up a letter from Apple. The interesting part though is the response from Gizmodo:

Happy to have you pick this thing up. Was burning a hole in our pockets. Just so you know, we didn’t know this was stolen [as they might have claimed. meaning, real and truly from Apple. It was found, and to be of unproven origin] when we bought it. Now that we definitely know it’s not some knockoff, and it really is Apple’s, I’m happy to see it returned to its rightful owner.

Followed by commentary about the legal ramifications, per their lawyers:

(Our legal team told us that in California the law states, “If it is lost, the ownerÂ has three years to reclaim or title passes to the owner of the premises where the property was found. The person who found it had the duty to report it.” Which, actually, the guys who found it tried to do, but were pretty much ignored by Apple. )

Except that’s not how it was portrayed in their first post. At least, not at first.

I can’t confirm this is any way, so I’m not going to make a blatantÂ accusation. And frankly, I could be wrong. But I’ve spent a lot of time pouring through their post, and in the time period between putting draft 1 of this to bed along with myself, and waking up the next morning, something’s been updated. I have no recollection of this passage:

He reached for a phone and called a lot of Apple numbers and tried to find someone who was at least willing to transfer his call to the right person, but no luck. No one took him seriously and all he got for his troubles was a ticket number.

He thought that eventually the ticket would move up high enough and that he would receive a call back, but his phone never rang. What should he be expected to do then? Walk into an Apple store and give the shiny, new device to a 20-year-old who might just end up selling it on eBay?

That sounds like a big case of CYA if I’m correct, which could be verified with Apple at some point, I’m sure. If I’m not, apologies to all around. Regardless, Mister X did know who had the phone at the bar, and could’ve given it back to him directly just by sending him a message via Facebook. He had his name, after all. So even if this passage was added after the fact, Mister X is still in the wrong and could have – and should have – returned the phone.

This may come across at first like it’s the score of the century, and a huge scoop for Gizmodo. But the way the device was acquired, from start to finish, is shady and I think that there will be more revealed on this topic in the days ahead. I think at the end of it all though, this might be a lesson about how to deal with Apple and how not to deal with them.