Covershock – Kuo Design Shows All Jobs Covers in One... 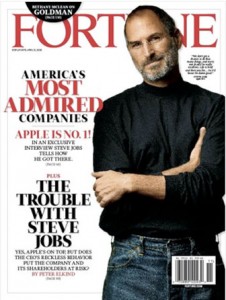 Put up a Google Alert for “Steve +Jobs” and see what you get. I recently discovered that Kuo Design has printed a page with every Steve Jobs magazine cover he’s ever done, all in one place. This one above is my favorite, but there’s a brief story as to why.

I’m a car guy, and as such, I read a lot of car sites as well. One person I’ve always been secretly jealous of is Jay Leno. Not because of his dashing good looks or the chin you could set a teapot on, but because of the warehouses he owns in Burbank where he keeps his cars. Jay has a full-time staff of employees working on repairing, reconditioning and tuning every one of the hundreds of cars he owns, including some super exotic ones that most collectors would give a kidney for.

Oooh. Kidney joke in a post about Steve Jobs. My bad.

Anyways, Leno wears these fancy suits all the time on stage, but if you ever see him at the garage or at his house, he’s always wearing the same thing: jeans with a long sleeve denim button-up shirt. Sometime in the ’90s, he decided that it just wasn’t worth it to have variety in his wardrobe, so he might as well just find something he likes and stick with it. Jeans and Denim it was, and it has been ever since, even though it’s long since gone out of fashion.

I think you see where I’m going with this.

Looking at those covers, I’d say a good 60% show Steve in his traditional jeans and a black mock turtleneck. He’s worn it on stage and in interviews forever now, and it seems like if I ever were to bump into him at the mall or something, he’d have to be wearing the same outfit, otherwise he might as well be in witness protection. I don’t think he’s like Leno in that he only has one outfit in his wardrobe six times, but I’m sure that he has a very specific public look that he wants out there, and he’s nailed it.

Not all of us can pull this off, though. I learned that 5 years ago when I had to give up my cut-off denim shorts and ripped tank top look.