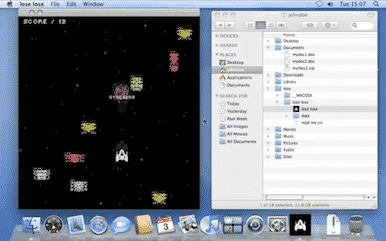 There is a game app going around in cyberspace called Lose/Lose and it is very similar to Space Invaders, but with a deadly twist.

When you shoot and kill alien, the game deletes a file from your computer.

The creator of this game app is Zach Gage, a digital artist from New York. I don’t understand what he was thinking when he created this app, but he included a philosophical view about the game in the Lose/Lose website.

“By way of exploring what it means to kill in a video-game, Lose/Lose broaches bigger questions. As technology grows, our understanding of it diminishes, yet, at the same time, it becomes increasingly important in our lives. At what point does our virtual data become as important to us as physical possessions? If we have reached that point already, what real objects do we value less than our data? What implications does trusting something so important to something we understand so poorly have?” – Lose/Lose

Whew. Heavy. Download the game AT YOUR OWN RISK, though I don’t really recommend it as it may contain other security threats like viruses or malware. But if you’re formatting your computer, you can probably try it out as you have nothing else to lose.

Symantec has already added the game to its list of potential security threat and has identified it as OSX.Loosemanque.