by Alexander Fox 5 years ago6 months ago

Modern Twitter is a largely mobile platform. The Twitter application ecosystem reflects this. You’ll see the broadest selection of Twitter clients for iOS, but what about desktop Twitter clients for macOS? There are some options, with a few stand-out hits available. 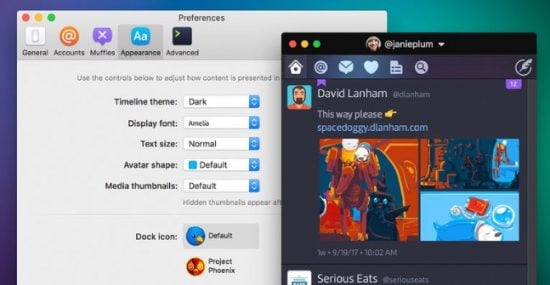 The app includes many of its own custom features, which are straight-up awesome. So many of Twitterific’s added features feel like no-brainers, and it’s amazing that Twitter hasn’t incorporated more of them.

Take Muffles, for example. This feature collapses tweets about topics you’ve filtered based on keyword, username, hashtag or linked domain. For example, I saw a ton of chatter in my feed about the Bachelor last week. I know nothing about the show, so I was totally out of the loop and disinterested.

By setting up a Muffle for Bachelor-related terms, I could filter out the content I wanted without blocking or unfollowing accounts that normally tweet content I like. You can also mute or block accounts the old-fashioned way, if you want to shut someone or something out completely.

There are also Topics. But tagging a series of tweets as a Topic, you tell Twitterific to automatically thread together multiple tweets and append them with the same hashtag. This makes your next tweet storm rant a little easier to manage, automatically keeping everything in one place.

If you use Twitterific’s excellent iOS app, Twitterific can also keep track of your last viewed tweet, syncing your timelines between mobile and desktop. It’s got a fairly customizable interface, with an attractive dark mode and a number of font options to tweak your display.

The only downside we found were the cheesy UI sound effects the app comes loaded with, but those can be turned off with a check box. The app isn’t free, but it’s well worth the price of admission. 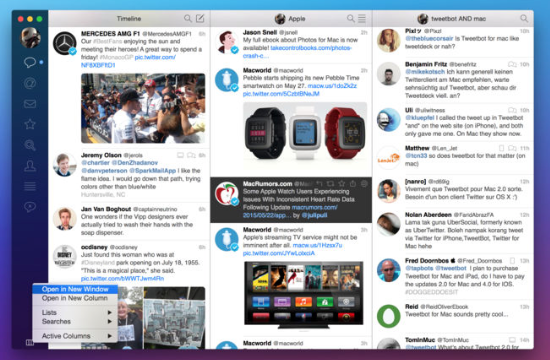 Publications have routinely cited Tweetbot as the best Twitter client for macOS. But ever since Twitterific triumphantly returned to the Mac desktop, it has dethroned Tweetbot from its magnificence. Nevertheless, it’s got a lot going forward, with a clean, streamlined interface, a nice composer and a flexible tabbed interface. It supports multiple docked columns to provide a dashboard-style approach to managing your media presence, or just a single column for a simplified view.

Unfortunately the once-great Tweetbot is now outclassed. The app simply doesn’t offer the range of customization or content controls that Twitterific presents, and that makes Tweetbot feel limited. 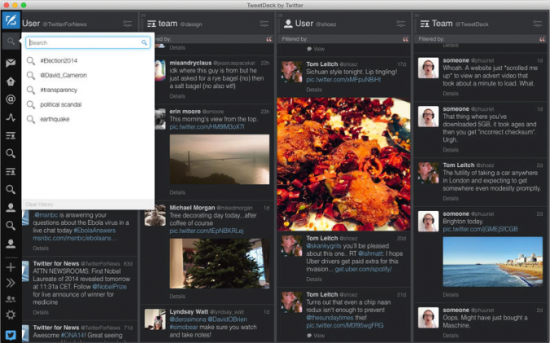 Tweetdeck’s multi-columned view is powerful and flexible, making it especially great for managing multiple Twitter accounts at once. We use it to monitor specific hashtags or keywords during major Apple events like WWDC or hardware launches. The live-updating searches make it easy to stay on top of the newest tweets on a particular topic.

The price is right, too: it’s a free download from the Mac App Store. There’s also a web app that can be accessed through your browser and syncs with your desktop setup. We didn’t like the interface as much as either Twitterific or Tweetbot, but the layout is highly similar.

Hootsuite is less of a Twitter client and more of a social media management platform. It works with Twitter, Facebook, LinkedIn, Google+, YouTube and Instagram accounts, letting you manage your entire online presence. That’s made it popular for those with especially active social media accounts, or professional social media teams.

As a Twitter client for macOS, it’s a little much. But if you need to manage a busy entire social media brand and don’t mind paying a significant monthly fee, you’ll get a ton of power and flexibility. 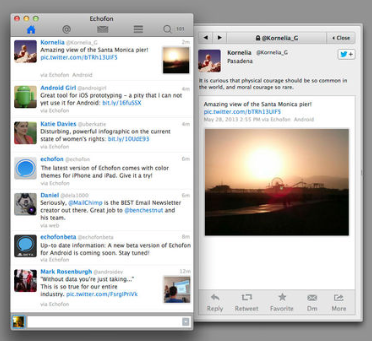 Echofon is getting pretty long in the tooth. The user interface is fairly dated, using the pre-modern Aqua UI elements with gradients and reflections. It’s not possible to open more than one window, so it’s not much more flexible than Twitter.com. Notifications are delivered via Growl rather than the built-in Notification Center, which isn’t exactly the modern method of notifying users.

Echofon unfortunately doesn’t have a lot to recommend it as a Twitter client for macOS, but the free price might attract some users. It does have a kinda-neat pop-out shelf for user profiles, but so does Twitterific. 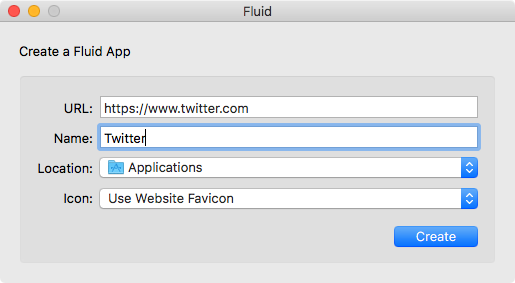 Fluid isn’t a Twitter client for macOS, persay. But you can use it to easily make your own. Fluid lets you turn any web page into an app, meaning you can take the Twitter web client and give it a dock icon and application window. All you need is the URL to get set up. You can download and install Fluid for free.

Of course, there are downsides to this. Twitter in a desktop browser isn’t a fundamentally great experience. That’s probably what sent you hunting for Twitter clients for macOS in the first place. But if you don’t mind the web interface, you can stick Twitter inside its very own Dock icon with Fluid. This makes it easier to manage the application among a sea of browser tabs that might get busy.

In our examination of the best Twitter clients for macOS, we found that Twitterific was easily the best desktop Twitter client available. Tweetbot is a respectable runner-up, but it lacks the flexibility of Twitterific.