A Call for Help: Productivity Apps 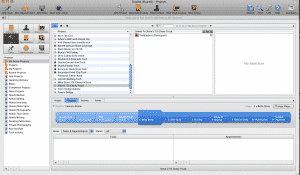 Back in October, I wrote a post about justifying the high cost of software, particularly when it came to Mac programs. It was all related to Daylite, a popular business management program by Marketcircle, and a program I was considering using for my own business. I eventually bought it, and Daylite Touch, and it worked OK for a while. But then, the problems started happening.

First problem was getting Daylite Touch to sync with the program on my MBP. I did it purely by accident, and now I’m petrified of changing a setting just in case I break it. Then the syncing problems happened. Occasionally, it would just break. It doubled my contacts in Address Book, then deleted some – which was a huge problem – and deleted some appointments. I’ve complained about Mobile Me before, but the fact is, right now it works just fine for me. Adding in Daylite screwed it all up.

Which is ultimately the problem. When I set an appointment, I put a reminder in iCal to beep before the meeting at a pre-determined time. Daylite Touch can’t notify me on the road, so I have to sync iCal with Daylite to get it to work. By doing that, I get the reminders. First, that meant that iCal, Daylite and my iPhone would beep for every appointment. Irritating at first, but I never missed a time. But then when it stopped syncing and broke numerous times, I just gave up on syncing the calendars. Same thing with the contacts, so now I have two contact lists: one in Daylite, one in Address Book.

Then there’s the task management system. I bought Things, and I like it. A lot. Daylite takes the GTD concept and screws it all up, making it not only difficult to add a task (which is counter productive) but also difficult to check off. It was stupid.

All that said, I do really like two things about Daylite: Project management and Mail integration. I prefer visual timelines, and the way Daylite handles my project pipelines is gorgeous. It’s frankly, the reason I bought it. Also, all of my e-mails are connected to projects, which makes me super organized. I can just go to the project and look up the e-mails instead of digging through Mail to find it.

At the end of it all though, I find myself using Daylite to manage my projects and nothing else. I’m using 1/10 of what it’s designed for, and although I like that 1/10, it’s not worth $50 a year for Daylite Touch and the $189 I paid for the program. I’ve tried working it out with their support team, but when they tell me it’s Mobile Me’s fault and not theirs when I never had a problem prior to Daylite, I start to question things.

Which leads me to the big question. I need help finding another option. After the jump, I’ll list what I’m looking for and hopefully, one of you can help me out.

Here’s what I want.

I’ve looked at a lot of different options, but nothing really seems right for me so far, and I’m a little gun shy on spending another chunk of cash on an experimental program. I’m looking for suggestions from those of you who have used these programs before, or maybe have seen them in action. Go ahead, it’s an open thread, and I’ll respond as comments come up. Help!